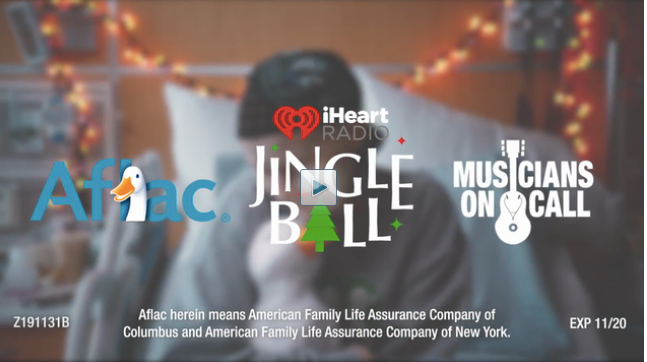 As an added benefit, Aflac recently collaborated with Musicians On Call and artists from iHeartRadio Jingle Ball's star-studded lineup to host an exclusive concert for pediatric cancer patients in Atlanta and Washington, D.C., who are unable to leave the hospital, bringing a piece of the annual tradition to them.

"Since 'Aflac Isn't' launched in January, our company remains steadfast in its mission to forge unique and meaningful relationships with consumers through the world's most renowned music events, and we are excited to close out the year with one of the biggest yet — the iHeartRadio Jingle Ball Tour," said Shannon Watkins, vice president of Brand and Creative Services at Aflac. "As we celebrate the season of joy and giving, we look forward to continuing to educate people about how Aflac doesn't work how they think it does and how we can help Americans with expenses health insurance doesn't cover throughout the holidays. Partnering with the iHeartRadio Jingle Ball Tour is a wonderful opportunity to drive our message home while offering some brave families an unforgettable experience this holiday season."

As part of Aflac's long-term commitment to reach consumers through music, Aflac will help tell the story of how music, like Aflac, is often more than it appears to be. Throughout the iHeartRadio Jingle Ball Tour, Aflac will integrate its "Aflac Isn't" messaging into the following music moments:

Aflac will host a "Level Up Lounge" for all parents and chaperones at several concerts, including Dallas/Fort Worth; Minneapolis/St. Paul; New York; Washington, D.C.; Atlanta; and Miami/Fort Lauderdale. The Level Up Lounge will provide a VIP experience available to standard ticket holders with free food and beverages, charging stations, comfortable seating and streaming of the concert. Aflac Isn't trivia will be offered for participants to win prizes to supplement their concert experience.
Parents will also find a "Supplemental Spinner" as part of Aflac's on-site activation in key markets. Participants will have an opportunity to spin a giant wheel and win prizes based on which Aflac Isn't phrase is selected. Prizes will include an instant upgrade to their family's iHeartRadio Jingle Ball experience.

Building on Aflac's 24-Year, $136-plus million commitment to childhood cancer treatment and research, Aflac collaborated with Musicians On Call, a nonprofit organization that brings live and recorded music to the bedsides of patients in health care facilities, and gave children at local hospitals the surprise of the season with two special shows. In Atlanta, popular boy band Why Don't We provided young patients and families at the Aflac Cancer and Blood Disorders Center of Children's Healthcare of Atlanta with an intimate acoustic performance. In Washington, D.C., award-winning country music stars Dan + Shay engaged patients and families with a special set at Children's National Hospital.

"It was exciting to team up with Aflac and Musicians On Call to bring the music and holiday spirit of iHeartRadio's Jingle Ball to children at the Aflac Cancer and Blood Disorders Center who aren't able to attend the event in December," said American boy band Why Don't We. "It was great surprising the kids, including one of our superfans, and their families with their very own concert and watching the huge smiles across their faces while we performed. We couldn't think of a better way to give back this season."

"It's important for us to take time out of our schedules to help others, especially during the holidays. We were excited to provide a one-of-a-kind performance with Musicians On Call and Aflac for young patients at Children's National Hospital," said country music duo Dan + Shay. "The iHeartRadio Jingle Ball Tour is a must-see holiday tradition, so we were grateful to give that joyful experience to incredibly brave children facing cancer and create a beautiful memory for everyone involved."

A heartwarming video recapping the Why Don't We and Dan + Shay hospital performances will be shared with concert-goers at select Jingle Ball stops and across digital and social media platforms throughout the tour. To join the conversation, follow the Aflac Duck (@AflacDuck) on Instagram and Facebook.

iHeartMedia is the number one audio company in the United States, reaching nine out of 10 Americans every month – and with its quarter of a billion monthly listeners, has a greater reach than any other media company in the U.S. The company's leadership position in audio extends across multiple platforms including more than 850 live broadcast stations; streaming music, radio and on demand via its iHeartRadio digital service available across more than 250 platforms and 2,000 devices including smart speakers, digital auto dashes, tablets, wearables, smartphones, virtual assistants, TVs and gaming consoles; through its influencers; social; branded iconic live music events; and podcasts as the #1 commercial podcast publisher globally. iHeartMedia also leads the audio industry in analytics and attribution technology for its marketing partners, using data from its massive consumer base. iHeartMedia is a division of iHeartMedia, Inc. (NASDAQ: IHRT). Visit iHeartMedia.com for more company information.

About Musicians On Call

Musicians On Call (MOC) celebrates 20 years and is the nation's largest organization delivering the healing power of music. MOC was founded in 1999 with the mission of bringing live and recorded music to the bedsides of patients in healthcare facilities ranging from children's hospitals to adult facilities, VA hospitals and hospices. To date, its volunteers have played for over 775,000 patients, families and caregivers across the country. Through live, in-room performances for patients who are undergoing treatment or unable to leave their beds, these volunteers add a dose of joy to life in a healthcare facility. MOC supporters over the years include Bruce Springsteen, Kelly Clarkson, Luke Bryan, Keith Urban, Lady Antebellum, Justin Timberlake, Ed Sheeran, Reba McEntire, Gavin DeGraw, Darius Rucker, Pharrell, Amos Lee, Nick Jonas, Rachel Platten and many more. For more information, visit www.musiciansoncall.org.

Aflac Incorporated (NYSE: AFL) is a Fortune 500 company helping provide protection to more than 50 million people through its subsidiaries in Japan and the U.S., where it is a leading supplemental insurer, by paying cash fast when policyholders get sick or injured. For more than six decades, insurance policies of Aflac Incorporated's subsidiaries have given policyholders the opportunity to focus on recovery, not financial stress. Aflac Life Insurance Japan is the leading provider of medical and cancer insurance in Japan, where it insures 1 in 4 households. Through its trailblazing One Day PaySM initiative in the United States, for eligible claims, Aflac can process, approve and electronically send funds to claimants for quick access to cash in just one business day. For 13 consecutive years, Aflac has been recognized by Ethisphere as one of the World's Most Ethical Companies. In 2018, Fortune magazine recognized Aflac as one of the 100 Best Companies to Work for in America for the 20th consecutive year, and in 2019, Fortune included Aflac on its list of World's Most Admired Companies for the 18th time. To find out more about One Day PaySM and learn how to get help with expenses health insurance doesn't cover, get to know us at aflac.com.