Submitted by: The Consumer Goods Forum 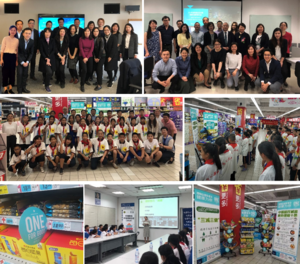 SHANGHAI, Nov. 14 /CSRwire/ - The Consumer Goods Forum is pleased to announce the official launch of the latest Collaboration for Healthier Lives (CHL) initiative in China. CHL is a key initiative of the CGF’s Health & Wellness work and aims to act on the critical role of the industry in preventing illness and empowering people to live healthier lives in countries and communities across the globe. The launch of the Chinese initiative follows previously launched and active initiatives in Colombia, Costa Rica, France, Japan, Mexico, Turkey, the United Kingdom and the United States.

CHL China’s journey began in the second quarter of 2019 with a kick-off meeting that served to identify and align on the key health and wellness issues for the initiative. This was followed by a series of best practice sharing discussions with Oliver Wyman and the CGF’s China team, as well as several in-depth research interviews with members (including Bright Dairy, Carrefour, Ele.me, METRO, PepsiCo and Walmart). The feedback from the interviews served as a solid foundation for preparations for the CHL China project design workshop that followed in Beijing in May.

In August 2019, a CHL China initiative discussion meeting took place in Shanghai where the project duration and topics were confirmed. The main topic decided was “Balanced Nutrition” with a focus on “Three Reductions” - salt, sugar and oil - and “Healthy Oral Hygiene”. Four working groups of the Health & Wellness China Steering Committee were also decided at this time:

The initiative officially launched in September 2019 and a variety of in-store activations have been implemented in Carrefour and RT-Mart stores in the cities of Beijing, Shanghai, Shenzhen, Chengdu, Hangzhou, and Shenyang. Digital activations have been designed in the Ele.me app and will launch later this year. To-date, the initiative has more than 20 multistakeholder partners from retail, manufacturing, academia and government.

The launch of the Chinese initiative marks a key milestone in the CGF’s CHL journey and is the start of increased collaboration for balanced nutrition within Chinese communities. The newly announced  China Board of Directors will also support CHL China and help drive the positive change agenda in China more broadly. Jing REN from Carrefour and Duncan DU from Nestlé will lead the Health & Wellness work in China as Co-Chairs from November 2019.

Visit the CHL China webpage to find out more.

About The Consumer Goods Forum

The Consumer Goods Forum (“CGF”) is a global, parity-based industry network that is driven by its members to encourage the global adoption of practices and standards that serves the consumer goods industry worldwide. It brings together the CEOs and senior management of some 400 retailers, manufacturers, service providers, and other stakeholders across 70 countries, and it reflects the diversity of the industry in geography, size, product category and format. Its member companies have combined sales of EUR 3.5 trillion and directly employ nearly 10 million people, with a further 90 million related jobs estimated along the value chain. It is governed by its Board of Directors, which comprises more than 50 manufacturer and retailer CEOs. For more information, please visit: www.theconsumergoodsforum.com

The Consumer Goods Forum ("CGF") is a global, parity-based industry network that is driven by its members to encourage the global adoption of practices and standards that serves the consumer goods industry worldwide. It brings together the CEOs and senior management of some 400 retailers, manufac...