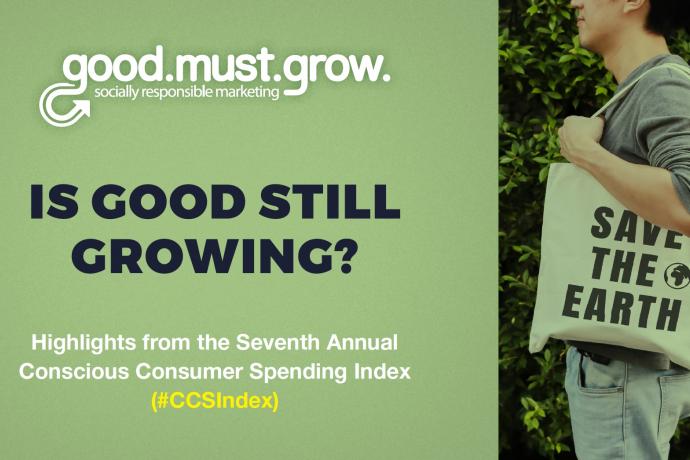 The seventh annual Conscious Consumer Spending Index (#CCSIndex) was released today, delivering a mixed diagnosis on the state of social responsibility in America. In total, 1,057 Americans were polled for the ongoing benchmarking study, which is conducted by Good.Must.Grow., a socially responsible marketing consultancy.

The bad news is that momentum for the “do good” movement seems to have stalled. For the third-straight year, fewer Americans reported participating in a range of “good” behaviors, such as recycling, reducing consumption, donating to charity and buying products and services from socially responsible companies. The biggest drop came in the “being green” category, which hit a high of 90 percent in 2015. This year, only 77 percent of respondents reported being green by recycling, properly disposing of waste and favoring reusable products. Meanwhile, 79 percent of consumers said they reduced consumption in 2013, while only 64 percent agreed with that statement in 2019.

“The majority of Americans remain committed to being conscious consumers, however our Index is focused on projecting the growth and momentum of socially responsible spending, and in that regard we aren’t currently headed in the right direction,” said Heath Shackleford, founder of Good.Must.Grow. “I think the decline is being driven by a combination of consumer overload, increasing confusion and a lack of optimism and confidence.”

In total, Americans report being less confident in their ability to drive change than in previous years. Meanwhile, 8 out of 10 consumers feel the state of the world is not improving, which has been shown to negatively impact their engagement with socially responsible behaviors. The biggest drag on “do good” behaviors, though, comes from a lack of understanding.

Overall the #CCSIndex fell to 39 on a 100-point scale from a previous all-time low of 45 in 2018. Specifically, younger Americans aged 18-24 and 25-34 saw the most significant decline in Index scoring, with scores for each falling 12 points over the past three years. The Index score is calculated by evaluating the importance consumers place on purchasing from socially responsible companies, actions taken to support such products and services, and future intent to increase the amount they spend with responsible organizations. Based on the design of the Index’s algorithm, even a one-point change in overall score indicates meaningful movement of consumer sentiment.

“The issues being addressed by social enterprises and mission-driven organizations are so nuanced and complex it’s almost unfair to ask the average consumer to make the right decisions all day, every day,” said Shackleford. “We aren’t making the ‘good decision’ easy enough for individuals. There’s way too much noise. It’s too hard. As a result, we are seeing a decline in the ability of consumers to support socially responsible businesses, even when their ideals align with such organizations.”

The 17 Sustainable Development Goals (SDGs), adopted by all United Nations Member States in 2015, are the world's best plan to build a better world for people and our planet by 2030. But few Americans are even aware of them. In fact, less than one-third of Americans reported being familiar with the SDGs.

When presented with the full list of SDGs and asked to choose goals that were more important to them, respondents ranked the following as their top five priorities:

This year marked the #CCSIndex’s fifth annual top 20 “Good Company” poll, compiled by responses to the question, “What company or organization do you think of first when you think of socially responsible companies/organizations?” Based on unaided recall, organizations were ranked by how frequently they were named.

“I think the biggest takeaway from the past few years is that we can’t expect consumers to lead this movement,” Shackleford said. “Our data shows that people are more than willing to reward companies for doing the right thing, but they aren’t fully equipped to drive the change we need to see. In other words, I don’t believe consumers can drive the bus, but they absolutely will go along for the ride if corporations and government entities continue to increase their commitment to sustainable business practices.”

About the Study
This study was conducted in partnership with Supportive Research Solutions. Sampling was provided by Dynata. Data was collected September 25-October 4, 2019. In total, 1,057 Americans were surveyed (margin of error is +/- 3%). For more information on the Conscious Consumer Spending Index, please visit www.goodmustgrow.com/ccsindex

About Good.Must.Grow.
Doing good by any means necessary. That’s our motto. We are obsessed with helping good organizations grow. We provide strategic marketing support for socially responsible businesses, nonprofit causes and individuals committed to making our world a healthier place. We also fuel our own initiatives aimed at specific causes, ranging from human trafficking to addiction to health and wellness. Proud to be a Certified B Corp and ranked as a Best for the World company. Learn more at goodmustgrow.com.