GM recognized for creating quality jobs in the U.S., promoting a transparent and supportive workforce culture and fostering safe workplaces 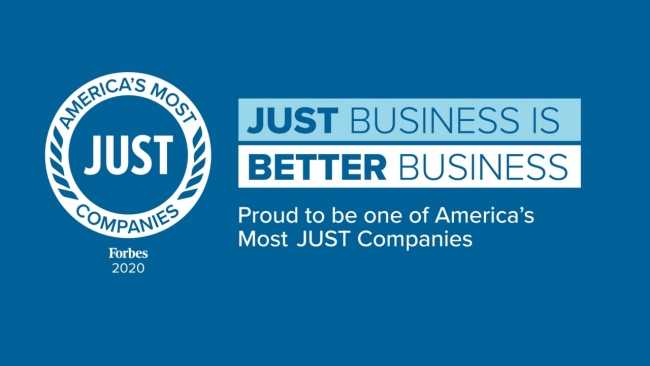 JUST Capital Names GM One of America™s Most JUST Companies

Today, General Motors was named one of America’s Most JUST Companies for 2020 according to Forbes and JUST Capital. The list of America’s Most JUST Companies honors U.S. corporations like GM that outperform their peers in the Russell 1000 on the priorities of the American people. These priorities include fair pay, ethical leadership, good benefits, work-life balance, equal opportunity, customer treatment and privacy, community support, environmental impact and delivering shareholder return.

GM was ranked No. 1 among automobile and parts companies for the third year in a row and No. 18 overall. GM leads the industry in the Workers and Communities categories for creating a transparent and supportive workplace culture with open communication; creating and retaining quality jobs in the U.S. and local communities; fostering safe workplaces; and providing positive customer service.

“We’re honored to be recognized as one of America’s Most JUST Companies,” said Sharon Basel, senior manager of Sustainability for General Motors. “At GM, we see a future of zero crashes, zero emissions and zero congestion, a vision we believe does right by all our company’s stakeholders – our customers, our employees and future generations. Being featured in the JUST 100 demonstrates that every decision we make and action we take is helping realize this vision and in turn, is delivering all the benefits of personal mobility while driving long-term success.”

The JUST Capital Rankings evaluate the largest publicly traded U.S. companies through a comprehensive survey process on public attitudes toward corporate behavior. It engaged 9,000 American respondents in 2019 and 96,000 total participants over the past six years.

Additional areas where GM performed the highest and differentiated from the industry average include:

“The JUST 100 companies demonstrate what good looks like in delivering value to all stakeholders – employees, customers, communities, as well as shareholders,” said Forbes Chief Content Officer Randall Lane. “These companies are leading the way in building long-term value.”

Compared to their Russell 1000 peers, companies in the JUST 100 on average:

“America’s Most JUST Companies are measurably outperforming their peers on the key Issues Americans care about most: taking care of employees by paying a fair and living wage, providing good benefits, as well as equal opportunity and career development,” said Martin Whittaker, CEO of JUST Capital. “Creating value for shareholders and stakeholders is not a zero-sum game, with JUST companies earning 6% higher Return-on-Equity than their peers.”

All of America’s Most JUST Companies will be included in Goldman Sachs Asset Management’s JUST U.S. Large Cap Equity ETF (Ticker: JUST) – the first ever exchange-traded fund based on just business behavior, constructed from JUST Capital’s annual rankings, which will rebalance in December 2019.

JUST Capital, an independent, nonprofit organization, aligns business practices with the priorities of the American people to ensure capitalism works for all. Our research, rankings, indexes, and data-driven tools help people make more informed decisions about where to invest, work, and buy to direct capital toward companies advancing a more just future.

Forbes Media is a global media, branding and technology company, with a focus on news and information about business, investing, technology, entrepreneurship, leadership and affluent lifestyles. The company publishes Forbes and Forbes Asia magazines, as well as Forbes.com. The Forbes brand today reaches more than 117 million people worldwide with its business message each month through its magazines and 38 licensed local editions around the globe, Forbes.com, TV, conferences, research, social and mobile platforms. Forbes Media’s brand extensions include conferences, education, financial services and brand licensing.

JUST Capital conducted its 2019 Survey, which included 9,000 respondents, in partnership with NORC at the University of Chicago and YouGov. The survey work consists of both qualitative focus groups and quantitative surveys, as described in the Rankings methodology. JUST Capital then tracks and evaluates corporate performance against the people’s priorities across 380,000 data points and creates the ranking model that drives America’s Most JUST Companies, including the JUST 100 and Industry Leader lists. The selection of companies draws from the Russell 1000 Index, which represents over 90 percent of the U.S. stock market value.

General Motors is a global company committed to delivering safer, better and more sustainable ways for people to get around. General Motors, its subsidiaries and its joint venture entities sell vehicles under the Chevrolet, Buick, GMC, Cadillac, Holden, Baojun, and Wuling and brands. More information on the company and its subsidiaries, including OnStar, a global leader in vehicle safety and security services, and Maven, its personal mobility brand, can be found at http://www.gm.com.