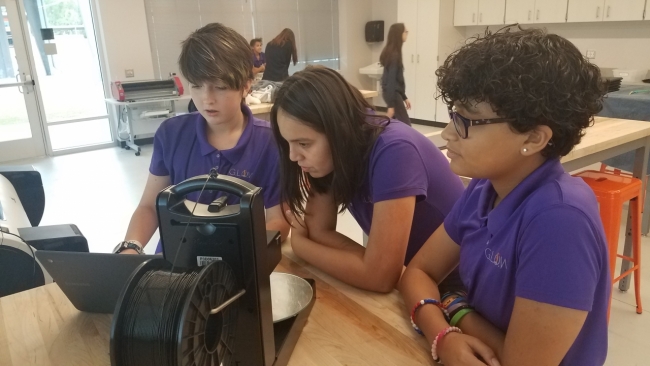 Students from the Girls Leadership Academy of Wilmington work with a 3D printer in the school's makerspace, which was funded through a $500,000 grant from the SunTrust Foundation.

The SunTrust Foundation today announced it has awarded a $500,000 grant to the Girls Leadership Academy of Wilmington (GLOW) for a state-of-the-art makerspace in what is North Carolina’s only single-gender public charter school. With tools, equipment and trained faculty, GLOW Academy’s SunTrust Foundation Makerspace combines a 21st-century science lab, woodshop, computer lab and art room in a vibrant creative area where students in grades six through 12 are given the tools and guidance to investigate, experiment, create and invent. The SunTrust Foundation Makerspace is on GLOW Academy’s new 31-acre campus that is dedicated to closing the achievement and opportunity gaps for low-income families. The school opened in August 2016 with its inaugural class of 100 sixth graders and will reach full enrollment of 725 students in the 2022/23 academic year.

“We are dedicated to helping GLOW students break through gender barriers,” said Todd Godbey, CEO of GLOW Academy. “The SunTrust Foundation Makerspace will ensure that our graduates have the skills to better compete and succeed in the modern business world or create businesses of their own.” The SunTrust Foundation grant will fund workspace modules; safety equipment; mechanical and power tools; materials and equipment for woodworking, metalworking and textile projects; a 3D printer, laser cutter and robotic workstations; faculty training; staffing and science, technology, engineering, arts and mathematics (STEAM) curriculum.

Studies show that inquiry-based instruction increases long-term retention of content and helps students perform as well as or better than traditional learners in high-stakes tests. Educators also see advancements in problem-solving and collaboration skills and improvements in students' attitudes toward learning.

“GLOW Academy is an outstanding institution,” said Sandra Spiers, Wilmington city president for SunTrust Bank. “We’re committed to improving the well-being of others in our communities, and this partnership will help position GLOW students for a more financially confident future as they gain a holistic education to prepare them for demanding careers.”

About GLOW Academy
The Girls Leadership Academy of Wilmington is North Carolina's only single gender public charter school. With a focus on closing the achievement and opportunity gaps among low income families, the 6th thru 12th grade school is part of a nationwide network of 19 groundbreaking and successful single-gender schools. This Young Women’s Leadership Network is guided by a proven educational model focused on academic rigor, personal responsibility, leadership and college preparedness. At GLOW Academy, she will: graduate, go to college and succeed in life. For more information about GLOW Academy and the grand opening celebration for its new campus, visit www.glowacademy.net.