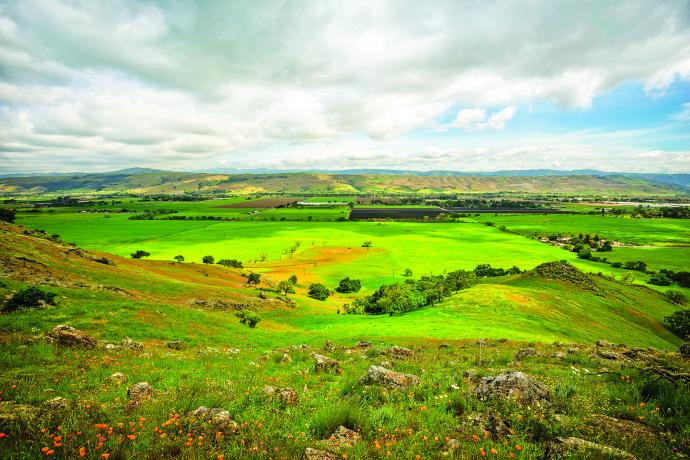 Today, the San José City Council unanimously approved the purchase and permanent protection of 937 acres in the North Coyote Valley through an innovative public and private partnership among Peninsula Open Space Trust (POST),  Santa Clara Valley Open Space Authority (the Authority) and the City of San José. This conservation transaction secures a critical “last chance” wildlife linkage between the Santa Cruz and Diablo mountain ranges. This irreplaceable landscape features natural floodplains and wildlife habitat, mitigates wildfire impact and builds climate change resiliency for the citizens of the tenth-largest city in the nation.

“Our preservation of Coyote Valley for future generations makes good on our collective obligation of stewardship of our — and more importantly, their — planet,” said San José Mayor Sam Liccardo.  “I’m proud of our work, together with the Authority, POST, landowners and many community stakeholders over the last four years, to negotiate agreements, build a public campaign, pass Measure T at the ballot box and ultimately deliver on our promise to the voters.”

Liccardo further added, “While consistent with the vision of many predecessors to protect our greenbelt for posterity, Coyote Valley’s conservation today also enables San José to become more resilient to a host of climate-related perils, from wildfires to floods to drought.”

The largely undeveloped area lies along the southern edge of San José city limits (see map below). The transaction includes land purchases from two willing sellers, the Sobrato Organization (335 acres) and Brandenburg Properties (572 acres). An additional 30-acre property, already owned and protected by POST, will be transferred to the City to complete the 937-acre deal.

Purchase details and sale agreements were approved today in an 11 – 0 vote by the San José City Council. The land purchases are expected to close by the end of November.

One of the largest “natural infrastructure” transactions in the country, the deal reflects a growing trend by cities to invest in natural floodplain protection as a more responsible fiscal alternative to incurring the human and financial costs that natural disasters such as floods have on communities. The $93.46 million deal is funded in part by $46.3 million from Measure T, a $650 million infrastructure bond approved by San José voters in November 2018. POST is providing $42.16 million in cash and real property that includes significant contributions from private foundations and individuals, including Mark and Debra Leslie, and Andrew and April Bosworth. The Authority is contributing $5 million. POST and the Authority are also working to secure significant funding from other public agencies.

“San José is taking an enlightened and fiscally astute approach to land use by putting jobs and housing where today’s workforce wants to be and discouraging the sprawl that both exacerbates traffic and pollution and interferes with the natural functions of the land itself. Optimizing land use in this way aligns perfectly with POST’s mission,” said Walter T. Moore, president of POST. “Clean air, fresh water, a healthy functional ecosystem and easy access to recreation are just some of the many benefits people and wildlife will experience as a result of a protected Coyote Valley.”

Previously slated for up to 6.6 million square feet of industrial development, the North Coyote Valley is the critical landscape linkage between the Santa Cruz and Diablo mountain ranges. It contains the South Bay’s largest remaining freshwater wetland, Laguna Seca, and natural floodplains upstream of San José. All of these constitute significant natural assets for supporting flood risk reduction when fully restored.

A scientific analysis published by the Authority in 2017, the Coyote Valley Landscape Linkage Report, describes the importance of Coyote Valley to wildlife movement, water resources, and environmental adaptation, so critical in this era of climate change. The report was the result of an eight-month collaboration by 18 local scientists and conservation managers that integrated new scientific findings, local expertise and previous connectivity analyses to develop a vision for the preservation of biodiversity in and around Coyote Valley.

The linkage report identifies North Coyote Valley as the critical landscape linkage between the Santa Cruz and Diablo Mountain ranges, allowing wildlife to migrate and adapt to a changing climate. It is the key link in connecting more than $3 billion of open space investments made in the neighboring mountain ranges, where there are 1.12 million acres of core habitat. Additionally, strategic conservation in Coyote Valley provides significant new opportunities for outdoor recreation and supports local agriculture.

“We have a once-in-a-lifetime opportunity to protect and restore this last chance landscape for its open space benefits including helping to build a climate resilient future for our urban and natural communities,” said Andrea Mackenzie, general manager for the Authority. “The Authority is honored to partner with the City and POST to deliver a greener future for Coyote Valley.”

The permanent protection of North Coyote Valley from industrial development follows years of coordinated efforts by a community of conservation organizations and their supporters to raise public awareness and galvanize civic action. Leading partners in this effort include the Committee for Green Foothills and Greenbelt Alliance, among many others.

Once the transactions are completed, the Authority will assume responsibility for managing, stewarding and opening these lands to the public. They will coordinate with the City, POST and other key stakeholders to lead a public planning process to define the future of Coyote Valley and open it to the public. The plan will inform how to restore these lands to enhance the ecological, economic and quality-of-life benefits that they uniquely provide. During the planning process, which is expected to take three to five years, the Authority will provide organized educational events and volunteer opportunities to introduce Coyote Valley to the public. Details on how to get involved can be found at openspaceauthority.org/coyotevalley.

"I commend Mayor Liccardo, the City Council, POST and the Open Space Authority for securing this landmark deal. Our natural environment is our first line of defense against climate change and this investment in Coyote Valley will be used as a model for climate-resilient infrastructure across the state,” said Ash Kalra, California State Assembly member for the 27th District. Kalra introduced Assembly Bill 948 in the California State Legislature to designate Coyote Valley as a landscape of statewide significance and create the Coyote Valley Conservation Program. “Along with the signing of Assembly Bill 948, this is a game-changing effort towards ending the decades-long urban sprawl mentality and speaks to the broad support for preserving and restoring precious resources throughout California.”

POST is working to raise $20 million in private funding in support of the North Coyote Valley transactions; details are available at openspacetrust.org/coyote-valley-program.

About the Peninsula Open Space Trust

About the City of San José

With more than one million residents, San José is one of the most diverse large cities in the United States and is Northern California’s largest city and the 10th largest city in the nation. San José’s transformation into a global innovation center has resulted in one of the largest concentrations of technology companies and expertise in the world. In 2011, the City adopted Envision San José 2040, a long-term growth plan that sets forth a vision and a comprehensive road map to guide the City’s anticipated growth through the year 2040.

Signed into law on September 27, 2019, AB 948 creates a Coyote Valley Conservation Program to be administered by the Open Space Authority, that designates Coyote Valley as a landscape of statewide significance for its natural infrastructure benefits including flood risk reduction, wildlife protection and climate resilience. More information can be found here.

High-resolution photos, video footage, maps of Coyote Valley and other media resources available at http://bit.ly/coyote-valley-media-resources. Or, contact post@landispr.com or (415) 604-8959.