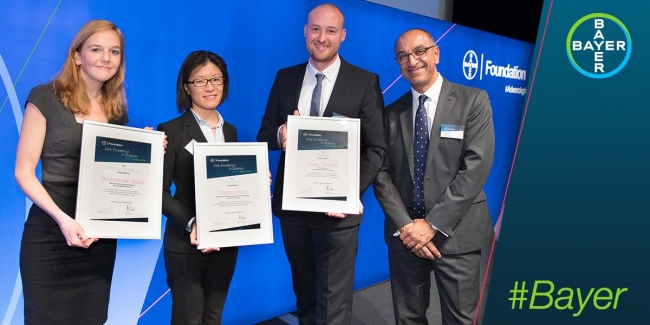 The new winners of the Bayer Early Excellence in Science Award have been announced. The prizes, each worth EUR 10,000, have been awarded by an independent scientific committee of the Bayer Science & Education Foundation. The Bayer foundation presents for ten years the international Bayer Early Excellence in Science Award to excellent young scientists and physicians in the early stages of their academic and clinical research careers. The prizes were awarded on October, 28th at the Bayer Foundation Day in Leverkusen.

“Research and science excellence play a central role for the life science company Bayer. I am delighted that these prizes give us the opportunity to support and motivate outstanding talents in Life Sciences and medicine,” said Kemal Malik, member of the Board of Management of Bayer AG responsible for Innovation, and member of the Board of Directors of the foundation. “Bayer’s innovation strategy has a long-standing history for exchange and partnership with academia. The promotion of up-coming leaders in research is an important element in our program. This early dialogue opens strategic partnership opportunities and thus is a key to future success of applied innovation,” continued Malik.

This international talent award was first presented in 2009. It is awarded in the three categories biology, chemistry and medical science. The selection is made on the basis of the originality and quality of candidates’ research and the significance of this work for the respective award category.

Discovery of a new DNA repair pathway
The genetic information – the DNA – in all of our cells is constantly challenged by various types of DNA damage. A failure to correct these lesions results in premature ageing and cancer development. Therefore, cells employ sophisticated repair mechanisms to detect and repair these threats to genomic integrity.

Stingele discovered an entirely unexpected DNA repair pathway, which is conserved from yeast to humans and is crucially important to prevent ageing and tumorigenesis. This new repair mechanism targets highly toxic covalent DNA-protein crosslinks and is essential for cellular viability. This revelation has wide-ranging implications for our understanding of cancer development, because it suggests that DNA-protein crosslinks are key drivers of endogenous genome instability. In his own laboratory Stingele now focusses on identifying the cellular processes causing the formation of DNA-protein crosslinks. To this end he employs a highly interdisciplinary strategy involving various approaches ranging from biochemistry, genetic engineering to functional assays in human cells and advanced imaging.

Small-molecule protein interactions to expand the druggable human proteome
The final layer of biological regulation is through a complex network of molecular signals relayed by chemical modifications on proteins, which influence how proteins interact with each other and function. Understanding the code relayed by these chemical modifications requires new innovations to systematically discover and measure their regulatory outcomes, and will lead to new approaches to control living systems and strategies for the design of biomarkers, targeted therapeutics, and mitigation of off-target toxicities in drug discovery.

Christina M. Woo is an Assistant Professor in the Department of Chemistry and Chemical Biology at Harvard University, and an affiliate member of the Broad Institute. She obtained a BA in Chemistry from Wellesley College (2008), and conducted undergraduate research in the laboratory of Professor Dora Carrico-Moniz. She obtained her PhD in 2013 from Yale University under the guidance of Professor Seth B. Herzon as an NSF predoctoral fellow in the synthetic and chemical biology studies of diazofluorene antitumor antibiotics. In 2013, Christina joined the laboratory of Professor Carolyn R. Bertozzi at the University of California Berkeley as a Jane Coffins Child postdoctoral fellow, and continued at Stanford University (2015) as a Burroughs Wellcome Fund postdoctoral fellow, where she developed a mass-independent chemical glycoproteomics platform for the identification of non-templated post-translational modifications. Christina joined the faculty at Harvard University in 2016. Christina’s independent research focuses on how small molecules influence protein function and biological signaling using large-scale chemical biology approaches. Her research has been recognized by the Sloan Research Foundation, International Chemical Biology Society Young Chemical Biologist Award, the NIH DP1 Avenir Award, and the Ono Pharma Foundation Breakthrough Science Award.

Unraveling the pathophysiology of cerebral small vessel disease
Cerebral small vessel disease (CSVD) encompasses alterations to the small vessels of the brain, resulting in ischemic or hemorrhagic lesions and cognitive impairment in affected older individuals. Only a subset of these lesions is captured with imaging techniques during life and the sequence of events leading up to the formation of infarcts and bleeds remains poorly understood.

In her research, Dr. Susanne van Veluw uses cutting-edge imaging techniques to address these knowledge gaps. During her graduate studies at the University Medical Center Utrecht in the Netherlands, under the supervision of Dr. Geert Jan Biessels, she used “7 tesla MRI” to visualize microinfarcts for the first time. Microinfarcts are ischemic lesions that are frequently observed at autopsy in brains with CSVD, but had remained undetected in living individuals. Using a combined approach of high-resolution in vivo imaging and ex vivo imaging in brain tissue samples, she was able to characterize these lesions in great detail, propose guidelines for their assessment, and demonstrate their prevalence and clinical significance in large imaging datasets in collaboration with (inter)national experts in the field. After her graduation, she moved to Boston in the USA to work with Drs. Steven Greenberg and Brian Bacskai at the Massachusetts General Hospital to further zoom in on CSVD, and in particular cerebral amyloid angiopathy (CAA). She continues to use ex vivo MRI-guided histopathology to unravel the pathological alterations in vessels underlying infarcts and bleeds in CAA. Moreover, she applies real-time two-photon microscopy in living transgenic mice to study functional alterations of individual small vessels over time. The goal of this multi-modal approach is to find early targets for intervention to delay or even halt the cascade of events responsible for lesion formation and cognitive impairment in older individuals.

The prize is awarded by the Bayer Science & Education Foundation. The primary objectives of the foundation are the recognition of outstanding research achievements, the promotion of talented scientists and support for important school science projects. In terms of content, the support and partnership activities focus on life sciences and medicine with impact on humanity’s grand health challenges and the nutrition crisis. The foundation honors outstanding research achievements every two years with the Otto Bayer Award and in alternate years with the Hansen Family Award, each of which carries a cash award of EUR 75,000. The program is rounded off by two prizes for up-and-coming researchers: The international Bayer Early Excellence in Science Award is presented annually in the categories biology, chemistry and medical science, each with prize money of EUR 10,000, while the Bayer Thrombosis Research Award, which supports scientists in the German-speaking region whose work focuses on basic and clinical research into thrombosis, is presented every two years and has prize money of EUR 30,000.

About Bayer
Bayer is a global enterprise with core competencies in the life science fields of health care and nutrition. Its products and services are designed to benefit people by supporting efforts to overcome the major challenges presented by a growing and aging global population. At the same time, the Group aims to increase its earning power and create value through innovation and growth. Bayer is committed to the principles of sustainable development, and the Bayer brand stands for trust, reliability and quality throughout the world. In fiscal 2018, the Group employed around 117,000 people and had sales of 39.6 billion euros. Capital expenditures amounted to 2.6 billion euros, R&D expenses to 5.2 billion euros. For more information, go to www.bayer.com.

Forward-Looking Statements
This release may contain forward-looking statements based on current assumptions and forecasts made by Bayer management. Various known and unknown risks, uncertainties and other factors could lead to material differences between the actual future results, financial situation, development or performance of the company and the estimates given here. These factors include those discussed in Bayer’s public reports which are available on the Bayer website at www.bayer.com. The company assumes no liability whatsoever to update these forward-looking statements or to conform them to future events or developments.