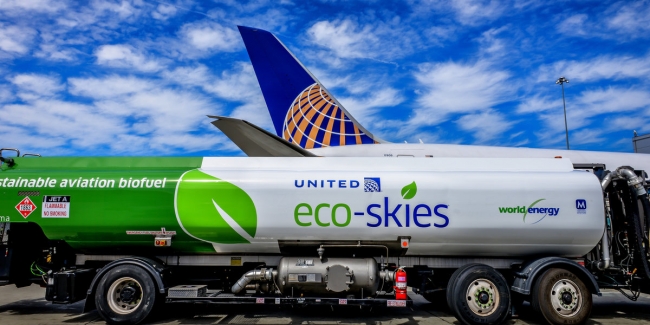 United Airlines today further strengthened its reputation as an aviation industry leader in environmental sustainability by committing $40 million toward a new investment vehicle focused on accelerating the development of sustainable aviation fuels and other decarbonization technologies. The carrier, which earlier this year agreed to purchase up to 10 million gallons of sustainable aviation fuel over the next two years, will look to collaborate with other environmentally conscious partners on this extraordinary initiative. Among all airlines around the world, United holds more than 50% of all publicly announced purchase commitments to using sustainable aviation fuels and is the only U.S. carrier to currently use this fuel on a continuous basis.

"United has been an industry leader in environmental sustainability – including being the first U.S. carrier to announce a bold pledge to cut our carbon footprint in half by 2050 relative to 2005," said Scott Kirby, United's president. "However, to achieve this goal, we can't be content as a leading airline undergoing an evolution to adapt to climate change. We aspire to be the airline leading the revolution to fight climate change, and this new initiative will further empower us to reduce our impact on the environment and fly towards a more sustainable future."

United's Commitment to the Environment

United's latest commitment to invest in the development of sustainable aviation fuel and decarbonization technologies, along with its pledge to reduce its greenhouse gas emissions, represents yet another leadership position the airline has undertaken to reduce its impact on the environment. Several of United's most significant environmental achievements include:

United's award-winning Eco-Skies program represents the company's commitment to the environment and the actions taken every day to create a more sustainable future. In 2017, Air Transport World magazine named United the Eco-Airline of the Year for the second time since the airline launched the Eco-Skies program. Additionally, United Airlines ranked No. 1 among global carriers in Newsweek's 2017 Global 500 Green Rankings, one of the most recognized environmental performance assessments of the world's largest publicly traded companies.

United's shared purpose is "Connecting People. Uniting the World." We are more focused than ever on our commitment to customers through a series of innovations and improvements designed to help build a great experience: Every customer. Every flight. Every day. Together, United and United Express operate approximately 4,900 flights a day to 358 airports across five continents. In 2018, United and United Express operated more than 1.7 million flights carrying more than 158 million customers. United is proud to have the world's most comprehensive route network, including U.S. mainland hubs in Chicago, Denver, Houston, Los Angeles, New York/Newark, San Francisco and Washington, D.C. United operates 788 mainline aircraft and the airline's United Express partners operate 560 regional aircraft. United is a founding member of Star Alliance, which provides service to 193 countries via 27 member airlines. For more information, visit united.com, follow @United on Twitter and Instagram or connect on Facebook. The common stock of United's parent, United Airlines Holdings, Inc., is traded on the Nasdaq under the symbol "UAL".