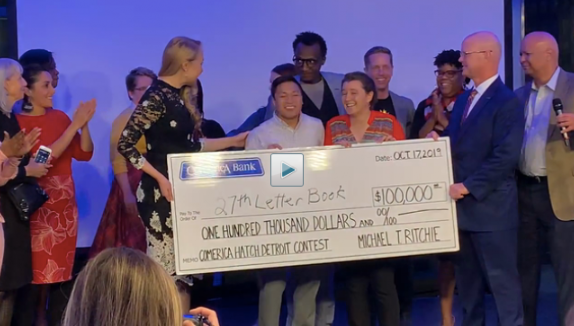 Your next new independent bookstore in Detroit will be 27th Letter Books, after the up-and-coming small business came away victorious in the 2019 Comerica Hatch Detroit Contest.

27th Letter Books, owned by Drew and Erin Pineda, was announced the winner of the Comerica Hatch Detroit Contest at the 'Shark Tank' style Hatch Off event. The independent bookstore will aim to open a brick and mortar location in Detroit's Jefferson-Chalmers neighborhood.

"We know we'll see great things from 27th Letter Books and their contributions to the small business community here in the city," said Vittoria Katanski, executive director of Hatch Detroit. "This year's Comerica Hatch Detroit Contest was incredibly close. We look forward to supporting 27th Letter Books alongside each of our Top 10 semifinalists as they work toward opening their doors."

"We congratulate Drew and Erin for winning this year's Comerica Hatch Detroit Contest, and we look forward to seeing what's next in their pursuit to fulfill their dream to join Detroit's thriving entrepreneurial community," said Michael T. Ritchie, Comerica Bank Michigan president. "While this culminates this year's exciting contest, we know that in many ways it also represents a new beginning for 27th Letter Books and all of our finalists. Supported by Hatch Detroit's successful approach to incubating small business development in Detroit, we have no doubt they will become a valuable addition to the city's growing independent business environment."

27th Letter Books was one of 10 semifinalists in the Comerica Hatch Detroit Contest that were announced to the public for voting in late September. After nearly 30,000 votes were cast, the contest's five finalists (27th Letter Books, Brix Wine and Charcuterie, ILERA Apothecary, Street Beet and The French Cow) were selected and introduced to the public. A second round of public voting, which saw an additional 25,000 votes, was initiated, and each finalist then pitched their business idea to a panel of judges and a live audience of their peers during tonight's Hatch Off event.

In addition to the $100,000 business grant from Comerica Bank, 27th Letter Books will also receive a package of more than $200,000 in pro bono counsel from Hatch Detroit and its partners, such as architectural, IT, legal and public relations services.

Comerica Bank's partnership with Hatch Detroit began in 2012, one year after the inaugural contest. Since then, Comerica has awarded a total of $450,000 in startup funding, with each winner earning $50,000, as well as 27th Letter Books' grant of $100,000 this year. In 2018, Comerica Bank provided an additional $20,000 in organizational support, making for a collective investment of $370,000 into Detroit's small business community. Hatch Detroit has also provided more than $1 million of in-kind services to both contest winners and alumni.

Comerica Bank, a subsidiary of Comerica Incorporated, has served Michigan longer than any other bank with a continuous presence dating back 170 years to its Detroit founding in 1849. It is the largest bank employer in metro Detroit and has more than 4,800 employees (FTE) statewide. With one of the largest banking center networks in Michigan, Comerica nurtures lifelong relationships with unwavering integrity and financial prudence. Comerica positively impacts the lives of Michigan residents by helping customers be successful, providing financial support that assists hundreds of charitable organizations, and actively participating in Detroit's downtown revitalization. Comerica Incorporated (NYSE: CMA) is a financial services company strategically aligned by three business segments: The Business Bank, The Retail Bank, and Wealth Management. Follow on Facebook: www.facebook.com/Comerica, Twitter: @ComericaBank and Instagram: @comerica_bank.

Hatch Detroit is a Michigan based 501(c)(3) organization supports both existing and new retail initiatives in the cities of Detroit, Highland Park and Hamtramck. Hatch Detroit was founded in 2011 to give residents and aspiring entrepreneurs a voice in the redevelopment of Detroit. Beyond the contest, Hatch Detroit provides funding, exposure and mentoring in support of its alumni entrepreneurs. Together, Hatch Detroit alumni have opened 44 businesses, employ over 500 people, and have invested over $7 million in their businesses. To learn more, visit www.hatchdetroit.com or connect with us on Facebook.