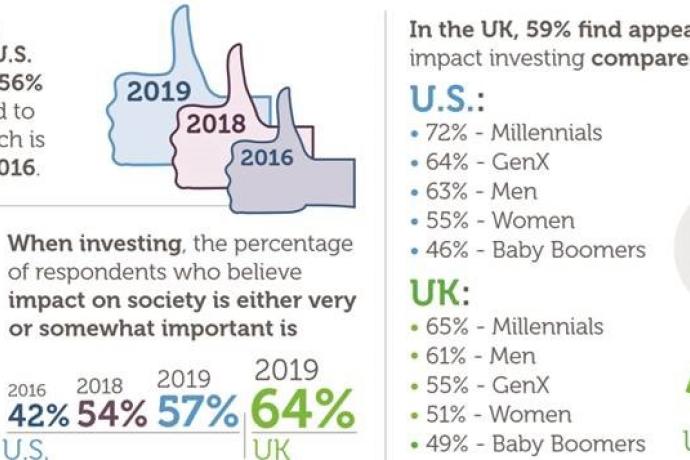 A study by global asset manager American Century Investments featuring respondents from the United States and United Kingdom reveals broad appeal of “impact investing,” financial investments designed to have a positive impact on society, while providing potential long-term returns. Whether it’s an investment that considers environmental, social and governance (ESG) factors or socially responsible investing (SRI), 56 percent of U.S. survey participants and 59 percent of UK respondents say the concept is either “somewhat” or “very appealing.” For U.S. respondents, this is up from 49 percent in 2018 and 38 percent in 2016.

For the third year, American Century surveyed 1,003 U.S. adults (18 years or older) to better understand generational and gender-based attitudes toward impact investing. For the 2019 study, the firm also surveyed 1,004 UK adults to gauge potential similarities or differences with U.S. respondents.

Millennials (ages 21 to 38) displayed heightened interest in impact investing in both the U.S. and UK, at 65 percent and 72 percent, respectively. While slightly lower, 55 percent of Gen X (ages 39 to 54) U.S. respondents find it appealing compared to 64 percent of their UK counterparts. Appeal among baby boomers (ages 55 to 73) drops to 49 percent in the U.S. and 46 percent in the UK.

Guillaume Mascotto, vice president, head of ESG and investment stewardship at American Century said, “The findings of our study reaffirm that interest in impact investing continues to be on an upward trajectory across all age groups, but most importantly, it is encouraging to see that millennials are in the driver’s seat for impact investing.”

According to the study, nearly two-in-five U.S. millennials plan to invest within the next five years, compared to one-in-three UK millennials.

“These trends are a significant signal to asset management firms that they will need to enhance their investment standards in an industry that will soon have to meet the expectations of more socially and environmentally responsible millennials,” Mascotto explained. “As this generation increasingly demonstrates a desire to align their positive intentions to address global pressing issues with their investment choices, it is crucial that we understand their values and preferences so that we can properly assess both opportunities and risks.”

While “return on investment, risks, fees and length of time” are the top considerations when making investments, 64 percent of UK respondents say that “impact on society” is either “very or somewhat important,” compared to 57 percent of U.S. respondents.

When survey participants were asked to select causes that “matter most” to them, “healthcare/disease prevention and cures” topped the list with U.S. and UK respondents at 30 percent and 35 percent, respectively. This is consistent with the 2018 and 2016 results. "Environment/sustainability,” ranked a close second among both the U.S. and UK respondents. Other selected causes in descending order included “improved education,” “mitigating poverty,” “gender equality” and “alignment with religious principles.”

“Regardless of whether you live in London, Tokyo or New York, quality healthcare and disease prevention are universal concerns,” said Mascotto. “In fact, the United Nations' Sustainable Development Goal 3 is focused on ensuring healthy lives and promoting well-being. This also aligns with American Century’s unique ownership model, which results in more than 40 percent of our annual dividends being directed to the Stowers Institute for Medical Research, a non-profit biomedical research institution focused on gene-based diseases.”

The survey was conducted among a representative sample of 1,003 U.S. adults and 1,004 UK adults, 18 years of age and older from August 8-11 and August 9-14, 2019, respectively. The study was fielded using Engine's twice-weekly Online CARAVAN® Omnibus Survey. The results from the survey were weighted by age, sex, geographic region, race and education to ensure reliable and accurate representation of the adult U.S. and UK population.