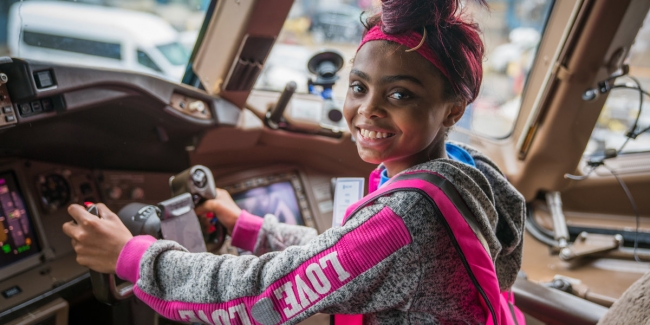 United Airlines is celebrating Women in Aviation International's annual Girls in Aviation Day with an airline record total of 14 locations around the world. On Oct. 2 and Oct. 5, more than 500 girls from various non-profit organizations are joining United for hands-on experiences and to learn from women about various career opportunities available in aviation, with a focus on non-traditionally female roles.

"United is proud to celebrate Girls in Aviation Day, engaging girls around the world as they begin to think about their own futures, so we can ensure a strong future of women in the industry," said Human Resources and Labor Relations Executive Vice President Kate Gebo. "We are proud to have a uniquely diverse workforce, but we recognize we also have more work to do to stay on this path and will continue to do all we can to inspire more women to pursue careers in aviation."

United is committed to leading in advancing women in the aviation industry. As part of the airline's efforts to break down barriers and promote inclusion, United has worked with Women in Aviation for nearly 30 years, joining the organization in recruiting women and providing scholarships for aspiring pilots. The airline employs the most female pilots of any major airline.

"United takes meaningful action in their support of Women in Aviation International all year long. United's Girls in Aviation Day events add forums in countries where the WAI Chapter network hasn't yet reached, lighting the spark of opportunity in aviation for girls in countries all over the globe," said Molly Martin, Outreach Director for Women in Aviation International. "The dedication to showing girls all the possibilities in aviation is real for United, and they are playing an important role in shaping the future face of aviation."

United's efforts to bring more women into aviation extend beyond pilots. United was also the first commercial airline to sponsor an all-female technicians team in the international aerospace skills competition and its cyber security group is comprised of approximately 40% women, which is nearly four times higher than the industry average. Additionally, United's Executive Vice President of Technology and Chief Digital Officer Linda Jojo was recently named one of the Top 50 Most Powerful Women in Technology by the National Diversity Council.

In 2019, United is focusing more than ever on its commitment to its customers, looking at every aspect of its business to ensure that the carrier keeps customers' best interests at the heart of its service. In addition to today's news, United recently announced that MileagePlus miles will now never expire, giving members a lifetime to use miles on flights and experiences. Customers now have more free on board snack options as well, with a choice of Lotus Biscoff cookies, pretzels and the Stroopwafel. The airline also recently released a re-imagined version of the most downloaded app in the airline industry, introduced ConnectionSaver – a tool dedicated to improving the experience for customers connecting from one United flight to the next – and launched PlusPoints, a new upgrade benefit for MileagePlus premier members.

United's shared purpose is "Connecting People. Uniting the World." We are more focused than ever on our commitment to customers through a series of innovations and improvements designed to help build a great experience: Every customer. Every flight. Every day. Together, United and United Express operate approximately 4,900 flights a day to 356 airports across five continents. In 2018, United and United Express operated more than 1.7 million flights carrying more than 158 million customers. United is proud to have the world's most comprehensive route network, including U.S. mainland hubs in Chicago, Denver, Houston, Los Angeles, New York/Newark, San Francisco and Washington, D.C. United operates 783 mainline aircraft and the airline's United Express partners operate 561 regional aircraft. United is a founding member of Star Alliance, which provides service to 193 countries via 27 member airlines. For more information, visit united.com, follow @United on Twitter and Instagram or connect on Facebook. The common stock of United's parent, United Airlines Holdings, Inc., is traded on the Nasdaq under the symbol "UAL".