JetBlue and TECHO Partnered to Build Homes for Families in Need in BogotÃ¡, Colombia 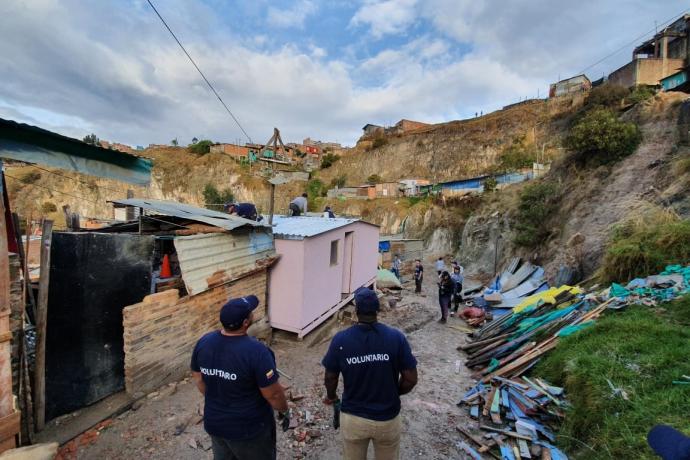 On September 28 and 29 JetBlue (NASDAQ: JBLU) completed a volunteer project with the non-profit organization, TECHO, in Cazucá-Soacha in Bogotá, Colombia building houses for families in need. TECHO seeks to build a fair, integrated, and poverty-free society, where everyone has the opportunities needed to develop their capacities and fully exercise their rights. This initiative is part of JetBlue For Good – the airline's platform for social impact and corporate responsibility.

To encourage volunteering, strengthen community ties and make a positive impact on its three Colombian destinations which JetBlue calls home, the airline launched an essay contest, inviting crewmembers from its network of more than 100 cities to participate for a chance to join other crewmembers and build houses with TECHO. Thirty crewmembers were selected to join local crewmembers from Colombia, as well as members of the community, business partners and volunteers from the TECHO organization to constructed three houses for families in need and from low incomes.

"Aligned with JetBlue’s mission of inspiring humanity, crewmembers from 30 JetBlue cities joined our crewmembers from Bogotá, Cartagena and Medellin, the three cities in Colombia that JetBlue serves, to help some of our Colombian neighbors in need", said Icema Gibbs, director corporate social responsibility, JetBlue. “Through our partnership with TECHO, we will make a direct impact by providing three families with a place to call home and a new sense of community."

Supporting the communities it serves is part of JetBlue's DNA and is core of its mission to inspire humanity. Focused on volunteering and service, JetBlue concentrates on the areas that are most important to its customers and the crewmembers – Community, Youth and Education and the Environment. JetBlue's core programs and partnerships directly impact the areas where its customers and crewmembers live and work.

This year, JetBlue celebrated its tenth anniversary of service in Bogotá, the airline’s first South American destination, with service from Orlando International Airport and Fort Lauderdale – Hollywood International Airport. Operation in the Colombian market has been part of JetBlue's continued expansion in Latin America. JetBlue's entry into Bogotá played an instrumental role in transforming air transportation in the market as it introduced great customer service standards at competitive fares. Latin America and the Caribbean currently accounts for one third of the airline’s network.