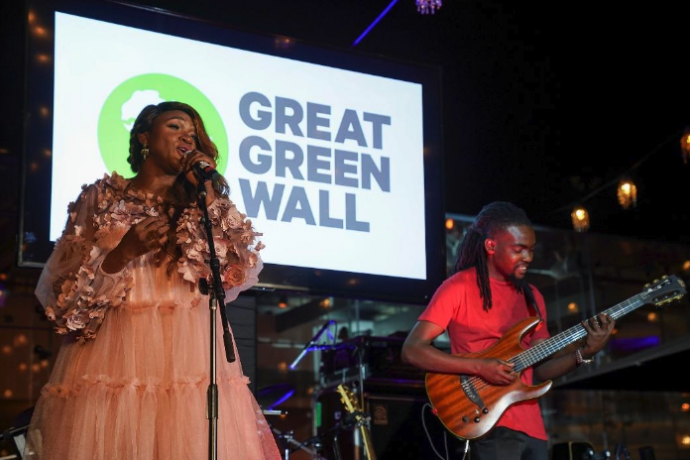 Leigh Vogel, Connect4Climate Nigerian singer Waje shared her voice in support of the Great Green Wall at an event to kick off UN Climate Week with Timberland, the UN Convention to Combat Desertification and World Bank Group™s Connect4Climate. The Great

Global outdoor lifestyle brand Timberland announces a partnership with the United Nations Convention to Combat Desertification (UNCCD) and World Bank Group’s Connect4Climate to support the Great Green Wall as a nature-based solution to fight the global climate crisis. The Great Green Wall is an African-led movement to grow an 8,000km line of trees across the entire width of Africa to fight climate change, drought, famine, conflict, and migration. It represents a marquis project in Timberland’s pledge to plant 50 million trees worldwide by 2024, announced earlier this month.

Timberland’s longstanding commitment to reforestation, and its support of the UNCCD’s Great Green Wall campaign, carries an important message about the power of partnerships to create real and lasting change.

“At the heart of the Timberland brand is our belief that a greener future is a better future,” said Jim Pisani, global brand president, Timberland. “But we know we can’t create lasting change alone, and we recognize how the power of partnerships, like ours with the UNCCD and its Great Green Wall, can make a true impact. We call on businesses, organizations and individuals everywhere to take action – big or small – to help make it better.”

To help kick off United Nations Climate Week, on September 22nd, Timberland, the UNCCD and the World Bank Group’s Connect4Climate program hosted an inspiring, high-energy event at Tavern on the Green (temporarily rebranded UNGA Goals House), and issued a call-to-action for influential leaders in business, policy, media, film and music to support the Great Green Wall.

During the event, 200+ attendees viewed clips from the upcoming feature documentary, “The Great Green Wall”, directed by Jared P. Scott and produced by MAKE Waves in association with the UNCCD with the support of Connect4Climate, and heard first-hand from those directly involved in the project. Guests also enjoyed live musical performances from Songhoy Blues, Waje and Grammy-winning artist Ricky Kej.

Later in the week, Timberland’s Director of Sustainability, Colleen Vien, also participated in a panel at the United Nation’s SDG Media Zone, focused on how the fashion industry is mobilizing climate action. Other panelists included Tricia Carey, Director of Global Business Development, Lenzing Group and Tolu Olubunmi, Manager of ActNow Climate Action Campaign. During the September 24th  panel, which was moderated by Kerry Brannigan, founder of the Conscious Fashion Campaign, Vien discussed Timberland’s call to action for the global community to join the movement. Vien noted, “small actions can have a big impact, small actions by many can create a movement, and a movement can change the world.”

Founded in 1973, Timberland is a global outdoor lifestyle brand based in Stratham, New Hampshire, with international headquarters in Switzerland and Hong Kong. Best known for its original yellow boot designed for the harsh elements of New England, Timberland today offers a full range of footwear, apparel and accessories for people who value purposeful style and share the brand’s passion for enjoying – and protecting – nature.

At the heart of the Timberland® brand is the core belief that a greener future is a better future. This comes to life through a decades-long commitment to make products responsibly, protect the outdoors, and strengthen communities around the world. To share in Timberland’s mission to step outside, work together and make it better, visit one of our stores, timberland.com or follow us @timberland. Timberland is a VF Corporation brand.

About the Great Green Wall

The Great Green Wall is an African-led movement to grow an 8000km line of trees across the entire width of Africa to fight climate change, drought, famine, conflict, and migration. Timberland is partnering with the United Nations Convention to Combat Desertification (UNCCD) and Connect4Climate - World Bank Group as part of the UNCCD-led campaign 'Growing a World Wonder’ which supports the Great Green Wall.  TREE AID - an international development organization that focuses on unlocking the potential of trees to reduce poverty and protect the environment in Africa – is planting trees in Mali as a key partner in the campaign.

Timberland (NYSE: TBL) is a global leader in the design, engineering and marketing of premium-quality footwear, apparel and accessories for consumers who value the outdoors and their time in it. Timberland markets products under the Timberland(R), Timberland PRO(R), SmartWool(R), Timberland Boot Company(TM) and Mion(TM) brands, all of which offer quality workmanship and detailing and are built to withstand the elements of nature. The Company's products can be found in leading department and specialty stores as well as Timberland(R) retail stores throughout North America, Europe, Asia, Latin America, South Africa and the Middle East. Timberland's dedication to making quality products is matched by the company's commitment to "doing well and doing good" -- forging powerful partnerships among employees, consumers and service partners to transform the communities in which they live and work.