With these new moves, announced during this year’s Climate Week, the Un-carrier continues to push the wireless industry toward making big changes to use clean energy and protect the environment. 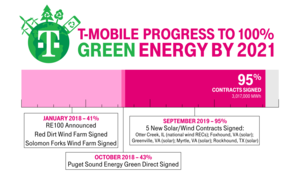 BELLEVUE, Washington , Sep. 26 /CSRwire/ - What’s the news: T-Mobile is launching its Solomon Forks Wind Project with ENGIE US Wind in Kansas and signing agreements with five additional clean energy sources across the U.S. These initiatives bring the company to 95% sourced clean energy, a massive step forward in its commitment to use 100% renewable energy by 2021.

Why it matters: Big companies have a responsibility to protect the environment — and T-Mobile takes that responsibility seriously. As the only major U.S. telecom to commit to 100% green energy, it’s no surprise the Un-carrier continues to be a recognized leader in sustainability by taking big steps that will have a big impact — and challenging others to follow suit.

Who it’s for: Anyone who’s concerned about how companies are doing their part to ensure the future of our planet!

Coming in clean and green during Climate Week 2019, today T-Mobile (NASDAQ: TMUS) announced several new moves that will bring the Un-carrier to 95% of its RE100 commitment to use 100% renewable energy by 2021. First, T-Mobile’s previously announced second wind farm partner, ENGIE US Wind, officially turned on its Solomon Forks Wind Project, now adding 650,000 MWh of energy to the grid annually. Additionally, the Un-carrier has inked deals on five new green contracts — four solar farms and another wind farm — that will be added to the Un-carrier’s clean energy provider portfolio when they come online by 2021.

“In 2018 we made a big industry-leading commitment to power ALL of T-Mobile — from cell towers to customer care centers to retail stores to headquarters — with renewable energy. Why? Simple. We know our operations have an impact on the environment and we want to do what we can to reduce that. Efforts like the ones we announced today just prove we continue to be ALL IN!” said John Legere, CEO at T-Mobile. “And by the way, I still challenge the other guys to do better and join us in our commitment to 100% green energy. We ALL need to do our part! So, who else is WITH US?”

T-Mobile began its transition to 100% renewable energy in January 2018, when it became the first and only major U.S. wireless carrier to join RE100, a group of influential companies around the globe dedicated to using entirely renewable energy by 2021. Along with reducing energy consumption and building green facilities nationwide, T-Mobile is achieving this ambitious goal by buying enough green power annually to account for every unit of electricity the company consumes. With the addition of today’s five new contracts, the Un-carrier is now participating in a total of EIGHT clean energy projects across the U.S. Once they’re all up and running, they will bring 3,017,000 MWh of green energy online — enough to provide electricity to 372,049 households per year!

T-Mobile’s is becoming a recognized leader in sustainability. The company’s commitments are featured as a case study in Digital With Purpose: Delivering a Smarter 2030, a report released by the Global e-Sustainability Initiative (GeSI) and Deloitte. The report calls upon global governments and businesses to identify ways to use digital tech nology to actualize the United Nations’ 2030 Agenda for Sustainable Development. T-Mobile’s sustainability efforts and achievements have also earned the Un-carrier top marks among U.S. wireless providers on Green America’s Wireless Scorecard two years in a row, easily outscoring its competitors. And T-Mobile remains the ONLY major U.S. wireless company signed onto RE100 and the ONLY one to have its carbon-reduction goals approved by the Science Based Targets Initiative.

About T-Mobile US, Inc.

As America's Un-carrier, T-Mobile US, Inc. (NASDAQ: TMUS) is redefining the way consumers and businesses buy wireless services through leading product and service innovation. Our advanced nationwide 4G LTE network delivers outstanding wireless experiences to 83.1 million customers who are unwilling to compromise on quality and value. Based in Bellevue, Washington, T-Mobile US provides services through its subsidiaries and operates its flagship brands, T-Mobile and Metro by T-Mobile. For more information, please visit http://www.t-mobile.com.