Clear The Shelters Campaign Results In Over 135,000 Pet Adoptions "“ And Counting 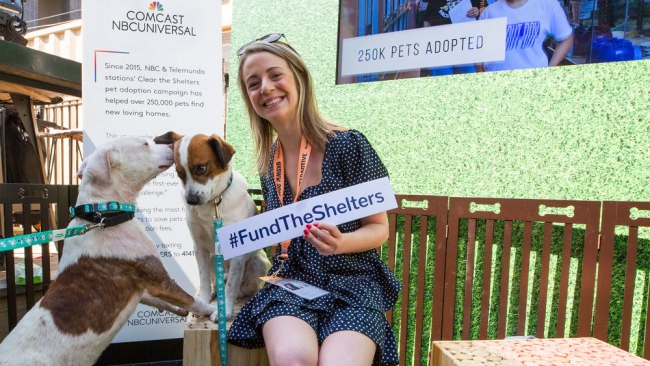 NBC and Telemundo owned stations’ Clear the Shelters™ 2019 campaign resulted in the adoption of more than 135,000 pets – and counting – as shelters continue to report in.

The campaign spanned from July 27, 2019 to August 17, 2019. This year’s pet adoption drive was held in more than 1,900 communities in the U.S., Puerto Rico and Hawaii. Clear The Shelters 2019 included the participation of more than 1,982 animal shelters/rescues, 98 NBC and Telemundo owned and affiliated stations, as well as several returning sponsors, and new partners. Clear the Shelters™ is spearheaded by NBCUniversal Owned Television Stations, a division of NBCUniversal. Since 2015, more than 385,000 pets – and counting - have found new homes through NBC and Telemundo stations’ Clear The Shelters initiative.

“This year’s campaign exceeded all of our expectations and resulted in a record number of pet adoptions since we launched our initiative in 2015. We are incredibly thankful to our national sponsors Cat’s Pride and Hill’s Pet Nutrition, shelters/rescues and our NBCUniversal family for the outpouring of support that helped to create awareness about pets living in shelters, so they could find new homes,” said Valari Staab, President, NBCUniversal Owned Television Stations. “To the thousands of people that supported our social media day on August 17, thank you for using your voices and influence to create a social media movement that trended nationally and helped thousands of pets get a new chance at life. Congratulations to all the families that adopted a pet during Clear The Shelters 2019. I look forward to making Clear The Shelters Day 2020 another special day for deserving animals and their loving families.”

"Clear the Shelters is one of our favorite days of the year and this year was our best year yet! We had a record day with the most adoptions we've ever done in one day, and also found homes for animals like the Snow the cat, who was with us for 177 days and Teddy, the deaf dog who was looking for a family that was able to work with his special needs. A huge thank you to all the folks who adopted, our online supporters who helped us get the word out about Teddy and all of our pets, and to NBC and Telemundo stations for putting on this amazing event each year. We can't wait to be a part of Clear the Shelters 2020," added Lewis Checchia, Executive Director for Morris Animal Refuge.

Pets of all types living in shelters for months and even years found new homes during Clear The Shelters 2019. Teddy, a catahoula leopard dog mix who is deaf, was adopted from the Morris Animal Refuge by a family in Philadelphia. The family learned about the pup on social media and knew they had found their perfect pet because their daughter is also Deaf. In Austin, Lamb, a five-year old pit-bull living at the Austin Humane Society since Hurricane Harvey impacted the area in 2017, found his new home after his new pet parent fell in love with him. In Connecticut, two senior cats who became homeless earlier this summer after their owner died, found new homes, together. Bob, a 4 1/2-month-old White Crested Black Polish rooster was also adopted and will join seven hens in his new home in Rhode Island.

NBC and Telemundo owned stations’ Clear The Shelters 2019 campaign featured several returning and new partnerships including repeat national sponsors Cat’s Pride and Hill’s Pet Nutrition, as well as PEOPLE – the leading entertainment news brand, and The Dodo, the #1 digital media brand for animal people, and the #1 most engaged with media brand in the world on mobile, both returning as the campaign’s exclusive content partners. New partnerships for 2019 included the Michelson Found Animals Foundation – a non-profit committed to saving pets and enriching lives – teamed up with NBC/Telemundo owned stations earlier this year to ‘Fund The Shelters’ with nearly $1.6 million in advance of August 17. WeRescue app also joined the campaign by helping users find Clear The Shelters adoptable pets directly from their mobile device, while GreaterGood.org presented $10,000 grants to select shelters to help pets living in facilities for years, find new homes. iHeartDogs.com donated needed pet supplies to select shelters.

The NBC and Telemundo owned stations’ Clear The Shelters Facebook posts reached more than 19 million users throughout the campaign. The #ClearTheShelters hashtag trended on Twitter nationally and in New York, Miami, Philadelphia, San Diego, Boston and Washington, D.C. on August 17. Online, NBC and Telemundo-owned stations websites and apps generated a combined total of 1.4 million-page views from July 17 to August 17 for content dedicated to the Clear The Shelters / Desocupar Los Albergues campaign, with nearly half a million-page views generated on August 17.