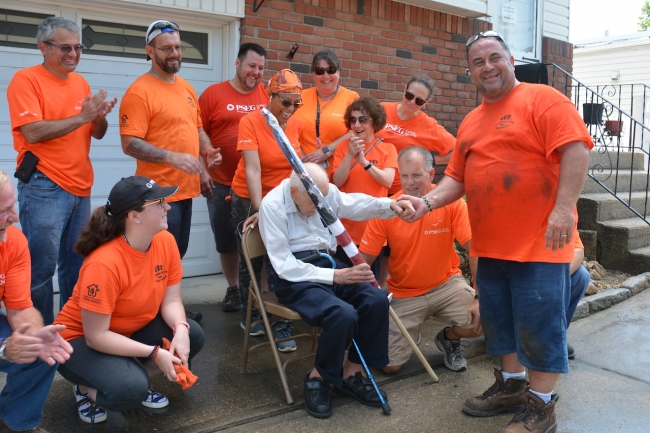 Ninety-three-year-old World War II veteran Ralph Cavaliere recently realized the power of PSEG Long Island’s community service when more than a dozen employees visited his home to help make his nineties more joyful. One of the volunteers was Nick Giorlando of Island Park.

With an eye on safety, the volunteers removed uneven patio tiles in Cavaliere’s Massapequa backyard, trimmed a 30-year-old overgrown fig tree, weeded around his Japanese garden, and power washed around the home. They also removed the former Army Air Force tail gunner’s faded old American flag and replaced it with a new one that Giorlando brought with him.

Cavaliere’s main wish was to have his record collection – hundreds of 78s and LPs, his stereo system and an antique Victrola – brought to the first floor of his home where he now lives. To fulfill this wish, volunteers removed a never-used, 40-year-old metal fireplace from the first floor to make room for the music.

“I never thought they would be able to do all of this for me,” said Cavaliere. “I’m grateful I can enjoy my music again. My walls are now alive with the sound of music thanks to these PSEG Long Island volunteers.”