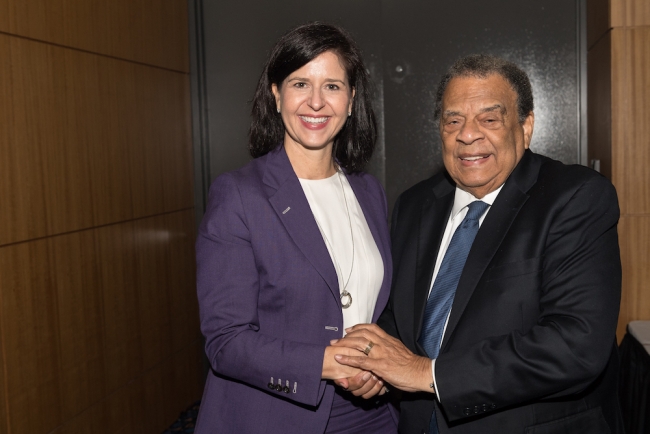 The center will be named “The SunTrust At-Promise Center Honoring Andrew Young.” It is set to open in 2021, located on land provided by the Walter and Andrew Young Family YMCA. The center will be a state-of-the-art learning and community facility with specialized services and programming, including financial education for youth and their families.

“The grants to the Atlanta Police Foundation are another example of SunTrust Bank’s commitment to Atlanta and efforts to improve the well-being of people in our community,” said Bill Rogers, chairman and CEO of SunTrust Bank. “Honoring Andrew Young as part of the At-Promise Center, which is focused on helping young people get their lives back on track, seemed natural given his legacy of service and devotion to improving opportunities for people in Atlanta and around the world.”

“The grants from the SunTrust Foundations will support and expand programs to help youth build self-sufficiency and better lives,” said Dave Wilkinson, president and CEO of the Atlanta Police Foundation. “Support from community partners allows us to further our overall mission to keep Atlanta safe and inviting to all its residents, workers and visitors.”

“We’re proud to support the At-Promise Initiative, as it focuses on ensuring troubled youth find meaningful pathways to productive lives,” said Jenna Kelly, president, SunTrust Bank Georgia Division. “We believe this investment in community building will pay dividends to our city and our neighborhoods for generations to come.”

The $3 million in grants from the SunTrust Foundation and SunTrust Trusteed Foundations is the largest gift ever made to the At-Promise Initiative.

The At-Promise Initiative has garnered significant national attention, winning the FBI Director’s Award for its success in reducing recidivism, or repeat offenses, among youth offenders. In its first two full years of operation, At-Promise enrollees have a 4% recidivism rate while the national rate is more than 15 times higher.

About the Atlanta Police Foundation
The Atlanta Police Foundation was established in 2003 to provide vital support to the Mayor, the Chief of Police and the Atlanta Police Department. The organization is based on a public-private partnership model that has worked to secure and leverage private resources to fund high priority projects designed to enhance the City of Atlanta’s ability to fight and prevent crime. As a result of the work of the APF, since 2003 there has been an increase in the number of police officers on the streets and an increase in the engagement of Atlanta’s business community and neighborhood residents in fighting crime. Additionally, the City has experienced a 58 percent reduction in the violent crime rate and a 41 percent reduction in crimes overall. Our programs are strategically focused to complement the Atlanta Police Department’s vision of becoming the safest, large city in America. We give high priority to programs that address the need for more police visibility and improved police operations. We also provide strategic counsel for the APD and aid in bringing private and public sector resources together for short and long range security planning for the City.