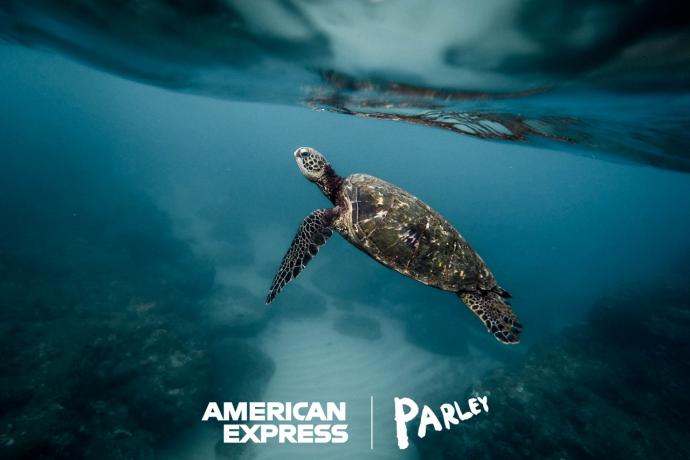 Today, American Express is proud to announce an expanded commitment to combat marine plastic pollution through several company-wide programs, including:

“Each year nearly eight million metric tons of plastic enters the oceans, threatening the ecosystems and wildlife that inhabit them,” said Doug Buckminster, Group President of Global Consumer Services, American Express. “As part of our brand promise to back our customers, colleagues, communities, and what they care about most, we’re committed to raising awareness for the issue of marine plastic pollution and doing our part to care for the oceans and coastal communities that we all share.”

“Plastic is a design failure. It stands for the toxic age we created, threatening the future of our oceans and our own species. By making their legendary Green Card with Parley Ocean Plastic, American Express introduces another Symbol of Change — and with it, a powerful commitment and an invitation for everyone to support our movement. Steps like these sound the bells of a new era, a new economy, where harmful substances and exploitative business practices are relics of the past,” says Cyrill Gutsch, Founder and CEO of Parley for the Oceans.

As part of its partnership with Parley, American Express is evolving its operations to embody the Parley AIR  Strategy (Avoid. Intercept. Redesign) to help combat marine plastic pollution. Initiatives include the following:

Later this year, American Express will introduce redesigned Consumer and Corporate Green Cards which will each be made primarily with reclaimed plastic collected from beaches, islands and coastal communities by Parley for the Oceans, an organization focused on combating marine plastic pollution.

To raise awareness for the issue of marine plastic pollution, American Express and Parley are kicking off a global call to action and rallying Card Members, merchants, partners and colleagues to join them. Today through September 23, consumers can go to the @AmericanExpress or @parley.tv Instagram pages and explain why they #BackOurOceans or tag friends who they want to get involved.  For each comment, American Express will partner with Parley to remove 2 lbs of plastic from beaches and coasts, up to 1 million lbs.

American Express is introducing the company’s first Card recycling program. Rolling out in 2020 for U.S. Consumer, Small Business, and Corporate Cards, the program will enable Card Members to send back their expired or non-working Cards to American Express who will ensure that they are properly recycled.

To learn more about American Express and its partners’ work to combat marine plastic pollution, as well as find more ways to get involved, visit: http://amex.co/BackOurOceans.

Parley for the Oceans is the award winning global network where creators, thinkers and leaders from the creative industries, brands, governments and environmental groups come together to raise awareness for the beauty and fragility of the oceans and collaborate on projects that can end their destruction. The organization has formed alliances with major corporations including adidas, Stella McCartney, Anheuser Busch InBev (Corona), American Express; the United Nations; the Republic of Maldives, International Chamber of Commerce and collaborators spanning the worlds of science, art, fashion, design, entertainment, sports, and space and ocean exploration. To know more: www.parley.tv

Parley understands current plastic is a design failure, seeing the long-term solution for marine plastic pollution in the redesign of the harmful material. In the meantime, Parley created a catalyst innovation that provides an immediate replacement for new, virgin plastic: Ocean Plastic®, a range of premium materials created from upcycled plastic waste intercepted from remote islands, beaches and in coastal communities by Parley for the Oceans. Together with its partners, Parley raised awareness worldwide for the issue, boosted the general image of recycling and established the first global supply chain for marine plastic debris. Additionally, Parley created a funding mechanism that financially allows the implementation of the Parley AIR Strategy in four key areas: Communication and Education, Direct Impact, Research and Development, and Eco-Innovation. Parley has developed a new material innovation: Parley Card Sheets(TM), made with Ocean Plastic®. This high performance material is based on PET and offers a less toxic alternative to current PVC materials used for credit cards.

American Express is a global services company, providing customers with access to products, insights and experiences that enrich lives and build business success. Historic preservation has long been the hallmark of American Express’ involvement in the community, reflecting the company’s recognition of the importance of cultural sites and monuments as symbols of national and local identity, and the role that their preservation can play in attracting visitors and revitalizing neighborhoods.