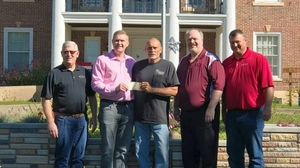 The donations are being presented to the organizations this month to support Hunger Action Month.

“As a global branded food company, we are inspired to do our part to help end food insecurity,” said Wendy Watkins, vice president of corporate communications at Hormel Foods. “We are proud to support Hunger Action Day and Hunger Action Month by providing these donations and partnering with Feeding America to encourage others to join in the effort to help end hunger.”

Some of the company’s donations being presented this month include:

“Innovative companies such as Hormel Foods know how to give back,” said Karen Hanner, vice president of manufacturing product sourcing at Feeding America. Each year Hormel partners with Feeding America and its food bank network by donating millions of pounds of nutritious food. We are extremely appreciative of Hormel Foods as they help Feeding America by their support to end hunger.”

Hormel Foods collaborates with retailers, nonprofit organizations and government agencies to help with hunger-relief efforts around the world. Through this program as well as disaster-relief efforts and other donations, Hormel Foods contributed $7.2 million in cash and product donations to help address hunger in fiscal 2018. For more information about the company’s charitable giving, please visit https://csr.hormelfoods.com/.