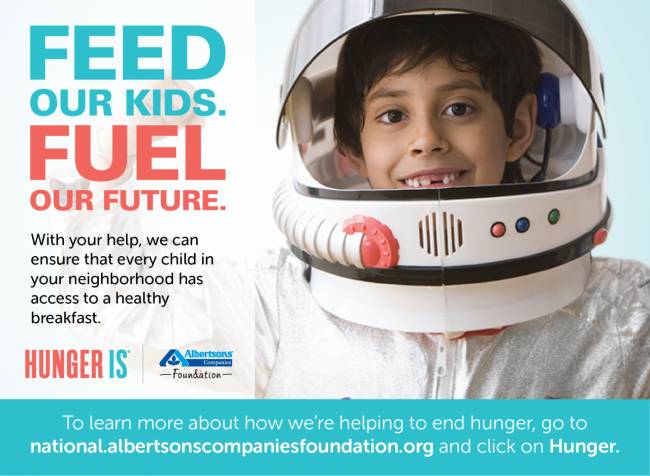 After raising $30.2 million since 2014 to transform the lives of 200,000 children in need, Albertsons Companies and Albertsons Companies Foundation are once again teaming up with their customers across the country to help make sure every kid starts the day with a healthy breakfast.

Through the end of September, Albertsons Cos. stores will raise money through Hunger Is to battle childhood hunger. Shoppers at Albertsons, Safeway, Vons, Jewel-Osco, Shaw’s, Star Market, Tom Thumb, Randalls, ACME, and other Albertsons Cos. stores can donate at checkout to this important cause. All donations stay in the communities in which they’re raised, helping local hunger relief programs.

“The theme for this year’s campaign is ‘Feed Our Kids. Fuel Our Future.’ It reflects the promise that an investment in children’s nutrition and health is an investment in the future of our communities,” Albertsons Cos. Foundation President and Executive Director Christy Duncan Anderson.

Partnering with Albertsons Cos. on this important effort are 146 food banks, pantries, and other charities that will receive Hunger Is grants to ensure that local kids start the day with a healthy meal. Each store adopts one of their local charities and focuses its efforts on that organization’s specific needs.

For example, several stores in Idaho are supporting the Idaho Foodbank Warehouse, Inc.’s Backpack and School Pantry programs. The Backpack program provides public school students with weekend backpacks full of food so the kids can eat consistently throughout weekends, while the School Pantry program serves students and their families with full-service pantries on school grounds.

Organizations receiving Hunger Is funds are chosen by stores in cooperation with the Hunger Is Advisory Committee (HIAC) and Albertsons Companies Foundation. The HIAC is comprised of leaders from the most respected hunger advocacy organizations in the U.S. including Feeding America, Food Research & Action Center, Hunger Free America, Share Our Strength, and WhyHunger.

The Hunger Is initiative is part of Albertsons Cos.’s long-standing commitment to hunger relief. In the last four years, the company has donated nearly $1 billion in food to food banks and other hunger relief agencies, expanding their standing as one of the biggest retail supporters of hunger relief in the country. These donations were in addition to hundreds of tons of food contributed through local and regional food drives.

For more information about Albertsons Cos.’ commitment to hunger relief, please visit us here.

Albertsons Companies is one of the largest food and drug retailers in the United States, with both a strong local presence and national scale. We operate stores across 34 states and the District of Columbia under 20 well-known banners including Albertsons, Safeway, Vons, Jewel-Osco, Shaw’s, Acme, Tom Thumb, Randalls, United Supermarkets, Pavilions, Star Market, Haggen and Carrs, as well as meal kit company Plated based in New York City. Albertsons Companies is committed to helping people across the country live better lives by making a meaningful difference, neighborhood by neighborhood. In 2018 alone, along with the Albertsons Companies Foundation, the company gave $262 million in food and financial support. These efforts helped millions of people in the areas of hunger relief, education, cancer research and treatment, programs for people with disabilities and veterans’ outreach.

Safeway Inc. is a Fortune 100 company and one of the largest food and drug retailers in North America, based on sales. The company operates 1,740 stores in the United States and western Canada and had annual sales of $40.2 billion in 2006. Safeway supports a broad range of charitable and community programs and last year donated more than $154 million to important causes, such as cancer research, education, food banks and programs focused on assisting people with disabilities. The company's common stock is traded on the New York Stock Exchange under the symbol SWY.