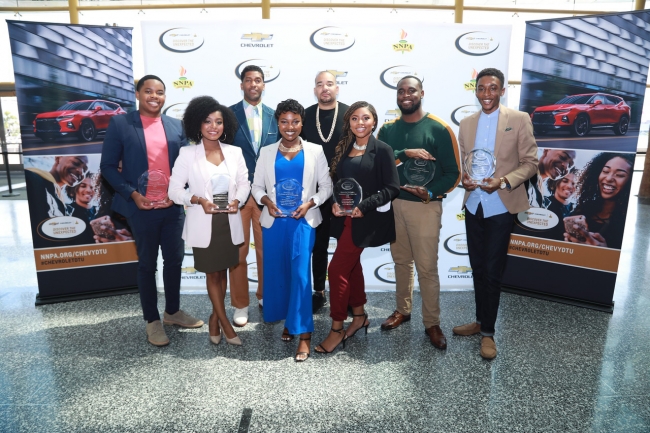 Chevrolet and the National Newspaper Publishers Association this summer hosted a ceremony celebrating the fourth year of the award-winning Discover the Unexpected program. The annual program has awarded nearly a half-million dollars in scholarships and stipends since its inception in 2016. It began with a select number of schools and, based on the overwhelming response, the submission process was opened to all students in their sophomore through senior years at Historically Black Colleges and Universities with an interest in journalism, communications, mass media or visual arts.

The eight-week fellowship kicked off in Atlanta and culminated in Detroit at General Motors Global Headquarters. During the closing ceremony, the fellows received their $10,000 scholarships and certificates of completion. Lifestyle influencer and 2019 DTU Advisor Fonzworth Bentley (a graduate of Morehouse College), 2019 DTU Ambassador DJ Envy (“The Breakfast Club” and a graduate of Hampton University), Chevrolet leaders and NNPA President and CEO Dr. Benjamin F. Chavis Jr. spoke, as did the fellows.

“Chevrolet was excited to partner with the NNPA to drive the importance of storytelling and finding new roads during their fellowship,” said Brad Franz, senior manager, Crossover Vehicles Advertising & Marketing, Chevrolet. “The fellows seized the opportunity to embark on this unexpected journey of professional and personal self-discovery while gaining new tools along the way.”

“The NNPA was excited to partner with Chevrolet for another year in support of these young journalists to amplify community voices across our country,” said NNPA President and CEO Dr. Benjamin F. Chavis Jr. “Having these young journalists in our newsrooms working side by side with our publishers was inspiring, and we are committed to including young storytellers’ voices in our reporting.”

The six students wrote several powerful pieces, produced video content, participated in press conferences and met Charles Muse, one of the Chevrolet Blazer engineers. The fellows’ stories were featured on the NNPA website throughout the program.

Learn more about the Discover the Unexpected Journalism Fellowship at www.nnpa.org/chevydtu.

Access GM's latest sustainability report and diversity and inclusion report for more information about the company's efforts and progress.

Founded in 1911 in Detroit, Chevrolet is one of the world's largest car brands, doing business in more than 100 countries and selling more than 4.0 million cars and trucks a year. Chevrolet provides customers with fuel-efficient vehicles that feature engaging performance, design that makes the heart beat, passive and active safety features and easy-to-use technology, all at a value. More information on Chevrolet models can be found at www.chevrolet.com.

NNPA is a trade association of more than 200 African American-owned community newspapers from around the United States. Since its founding 75 years ago, NNPA has consistently been the voice of the black community and an incubator for news that makes history and impacts our country. As the largest and most influential Black-owned media resource in America, NNPA delivers news, information and commentary to over 20 million people each week. Americans from all backgrounds seek news from the Black perspective from the NNPA member newspapers around the country. In America, now among the most diverse countries in the world, the Black Press of America is more relevant than ever. To learn more visit www.nnpa.org/dtu