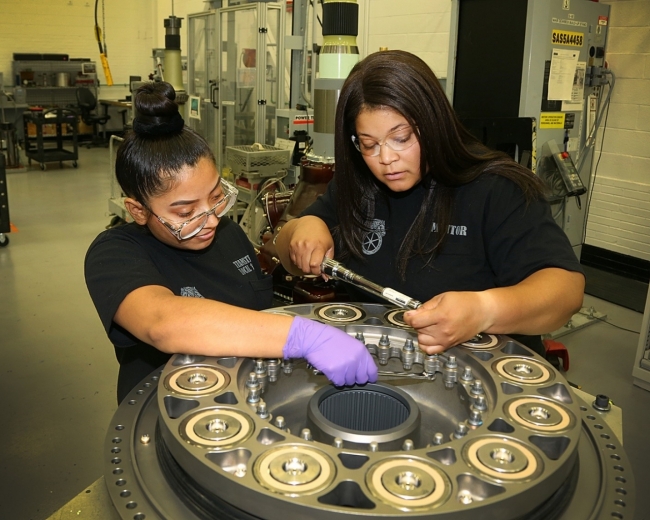 “The transition to a certified pre-apprenticeship is the next logical step for our program,” said Rocco Calo, Secretary-Treasurer and Principal Officer of Teamsters Local 1150. “Not only will it help us to recruit those students who are looking for industry recognized credentials, but it helps to bolster U.S. manufacturing by preparing these students to work in any aerospace facility.”

The August 8 ceremony celebrated the success of nearly 50 high school students who receive critical trade skills working on major products including the CH-53K helicopter, Black Hawk and Combat Rescue Helicopter. The program has been active since 2002, with more than 300 students participating across multiple trade disciplines.

“Advanced manufacturing and the aircraft and aerospace industries are booming right now in Connecticut,” said Kurt Westby, Commissioner of the state Department of Labor. “This program not only gives students a jumpstart on a great career but is a critical link in preparing our workforce to meet the needs of manufacturers that are creating much-needed economic growth in our state.”

This year marks the 18th year that Sikorsky has partnered with Teamsters Local 1150 for the Career Pathways Union Mentoring Program, giving students interested in hands-on learning an opportunity that exposes them to manufacturing skills and jobs. Teamsters Local 1150 has represented workers at Sikorsky for nearly 60 years, helping to create Connecticut, Florida and Alabama jobs.

“This pre-apprenticeship helps support Lockheed Martin’s commitment to create 8,000 new apprenticeship and workforce positions within the company through 2023,” said George Mitchell, Sikorsky vice president of Production Operations. “These students serve as a cornerstone of our talent pipeline and success of our workforce, as they help us fill advanced manufacturing occupations.”

For more workforce development program success stories like Teamsters/Sikorsky Career Pathways and to learn about Lockheed Martin’s commitment to investing in the workforce, visit our Economic and Workforce Impact webpage on the Lockheed Martin website.

About Lockheed Martin
Headquartered in Bethesda, Maryland, Lockheed Martin is a global security and aerospace company that employs approximately 105,000 people worldwide and is principally engaged in the research, design, development, manufacture, integration and sustainment of advanced technology systems, products and services.

About International Brotherhood of Teamsters Local 1150
Teamsters Local 1150 is the sole bargaining representative for the workers at Sikorsky, a Lockheed Martin Company in Connecticut, Florida and Alabama who build the world’s best rotary-winged aircraft. With a membership approaching four-thousand, members manufacture and assemble aircraft components with more than eighty occupations and skill groups to include mechanics, machinists, composite workers, tool makers, plumbers, electricians, inspectors, drivers and processors.

Headquartered in Bethesda, Md., Lockheed Martin is a global security company that employs about 132,000 people worldwide and is principally engaged in the research, design, development, manufacture, integration and sustainment of advanced technology systems, products and services. The Corporation's 2010 sales from continuing operations were $45.8 billion.