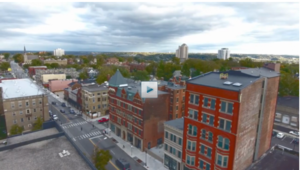 CINCINNATI, Aug. 20 /CSRwire/ - Duke Energy has announced $205,000 in grants to seven redevelopment projects that aim to stimulate growth, job creation and further investments in Greater Cincinnati’s urban cores. The grants are part of the company’s Urban Revitalization initiative, which has awarded nearly $2.4 million in grants to 72 projects in southwest Ohio and Northern Kentucky since its launch in 2011.

Today’s announcement took place at the headquarters of Road iD in Covington, Ky. Road iD, a family-owned business that manufactures custom products to help first responders identify people in case of an emergency, was awarded a Duke Energy Urban Revitalization grant in 2017. The company and its partners invested millions of dollars to transform an underutilized, historic building into a dynamic office, manufacturing, assembly and warehousing space that houses dozens of local workers.

“Road iD shows how investing in our urban cores makes such a positive impact on people and communities,” said Amy Spiller, president of Duke Energy Ohio and Kentucky. “We are proud of the Road iD success story and committed to spurring additional redevelopment and job growth in our communities through our Urban Revitalization program.”

“We recognized the economy was still feeble and communities were continuing to struggle,” said Spiller. “As we spoke to community groups and studied the landscape, we repeatedly found individuals and organizations that wanted to make or facilitate investments in the region’s urban cores but lacked the financial resources to jump-start their projects.”

Major redevelopment initiatives sometimes can’t get off the ground due to small, but critical, upfront costs. That’s where the Urban Revitalization grants show their value. Although modest compared to the multimillion-dollar costs of redeveloping a property, the funds typically serve as a means for grantees to obtain the necessary credentials – like architectural and engineering plans – that are required for seeking and securing additional grants and financing for construction.

“The Urban Revitalization grants are catalysts,” said Spiller. “They help individuals and groups overcome major obstacles. And, once projects are complete, neighboring properties become prime prospects for their own redevelopment.

Here are summaries of the projects that were awarded grants today.

This 2019 grant will fund conceptual planning and final designs for the 12,000-square-foot Mergard Building at 6060 Hamilton Ave. Once the redevelopment work is complete in 2022, the building is expected to feature 10,000 square feet of commercial space and about 2,000 square feet for residential use, create 10 new jobs and support 10-15 temporary construction positions.

The Madisonville Community Urban Redevelopment Corp. will use its Urban Revitalization grant for architectural and engineering work needed to stabilize a historic structure, which will eventually house two new businesses: a bakery and a restaurant.

The building at 6012 Madison Road is a blighted and vacant structure in the heart of the Madisonville business district – near the renovated Metz House, which received an Urban Revitalization grant in 2016. Once renovated, the two businesses at 6012 Madison Road will create 22 jobs in the community. The businesses’ owners, one of whom was raised in Madisonville and recently moved back to the community, are committed to hiring local residents for both the bakery and restaurant.

The 12,875-square-foot Durner Building at 2453 Gilbert Ave. in Walnut Hills’ historic Peeble’s Corner business district stood vacant for decades and fell into significant disrepair. Duke Energy awarded an Urban Revitalization grant to the Durner Building and neighboring Century Theater in 2015 for the first phase of the projects’ redevelopment.

The 2019 grant will be used for architectural and engineering work required for the final phase of construction – filling the remaining financing gap to complete the project. When finished, the building will house restaurant/retail space and offices for the Walnut Hills Redevelopment Foundation and MORTAR, which is a nationally recognized group that builds communities by enabling underserved entrepreneurs and businesses to succeed. The developers expect the building to generate 33 permanent jobs once work is complete and the spaces are occupied.

OTR A.D.O.P.T., or Advancing Derelict and Obsolete Properties through Transfer, works to match historic buildings in Over-the-Rhine and other historic neighborhoods with individuals who have the ability and commitment to bring them back to life.

The group’s vacant and blighted property at 2151 Colerain Ave. in the West End is in dire need of structural work to make it attractive for redevelopment. The Duke Energy Urban Revitalization grant will be put toward employing engineering, architecture and construction professionals to plan and carry out the stabilization work, and market the property to a potential owner who will complete the redevelopment work and recruit tenants for the ground-floor commercial space and four apartments on the upper floors.

The 9,300-square-foot building at 438 W. 11th St. in Newport, Ky., was built in 1899 as a railroad hotel to support the city’s steel industry and, most recently, was home to West Side Café. The prominent and historic three-story building now stands vacant and is in dire need of extensive renovations to return it to a productive use in Newport’s burgeoning West Side neighborhood.

Fedders Construction, a rapidly growing design-build firm that recently moved into the former Green Line Car Barn across the street from the former West Side Café building, is partnering with the Catalytic Fund on this project and to recruit tenants for the redeveloped first-floor restaurant space and office/residential opportunities on the upper floors. The Duke Energy Urban Revitalization grant will be put toward predevelopment soft costs, like architectural and engineering work, that are typically not able to be financed through traditional means. The restaurant space is expected to create roughly 10 new jobs in the neighborhood, while the entire project is likely to support about 10 temporary construction positions.

Jason Reser, owner of Reser Bicycle Outfitters and Trailhead Coffee, is no stranger to Monmouth Street in Newport, Ky.; he’s operated his bike business at 648 Monmouth St. since 2000. And Reser sees an opportunity for additional positive redevelopment in Newport’s central business district. That’s why he’s partnering with the Catalytic Fund to return the 700 Monmouth St. property to its former glory – and create commercial and residential spaces.

The building, built around 1865, has housed a variety of businesses including an ammunition shop and a sewing and vacuum store. The Duke Energy Urban Revitalization grant will be used to restore the building’s façade and transform the interior into 1,300 square feet of tenant-ready commercial space and four apartments. Once complete, the building will join past Urban Revitalization grant winners like Carabello Coffee Co. and The Baker’s Table in the transformation of Monmouth Street. And it could bring five new jobs to Newport.

Molly Malone’s Irish Pub & Restaurant has become a source of pride in Covington, Ky., since opening in 2007. The business owners are now working with the Catalytic Fund to transform an adjacent 6,000-square-foot building into an innovative specialty cocktail tasting lounge and unique event space.

The Duke Energy Urban Revitalization grant will help bring life to the deteriorating structure, which has stood vacant for 12 years. Once construction wraps up in late 2020, the project will join past Urban Revitalization grant winners like Hotel Covington and Braxton Brewing in Covington’s ongoing transformation, create six jobs and serve as a focal point of the Roebling Point entertainment district.