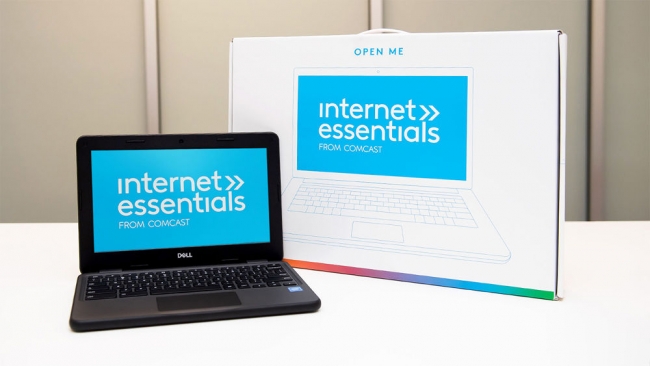 Comcast today announced it has expanded its initiative designed to help close the digital divide for low-income households.  As part of its mission to provide digital access for all, Dell Technologies is joining with Comcast’s Internet Essentials program, which is the nation’s largest, most comprehensive, and most successful broadband adoption program for low-income individuals.  The two companies will provide more than 2,500 free laptops to students, seniors, veterans, and adults in need.  In addition, Dell Technologies will provide funding to upgrade 15 computer labs at local nonprofits in different cities, including two senior community centers in Houston.

Earlier this week, Comcast announced it has significantly expanded eligibility for Internet Essentials to include all qualified low-income households in its service area.  The expansion is the most significant change in the program’s history, and the Company estimates a total of nearly seven million households now have access to low-cost Internet service, which literally doubles the total number of previously eligible households.  New populations like people with disabilities, new parents, and adults without school age children are now eligible to apply.

Comcast also announced that, since August 2011, it has connected more than eight million low-income people to the Internet at home, most for the very first time, including 600,000 in the state of Texas, 400,000 of whom are in Houston.  Houston is now the number one ranked city in America in terms of its overall participation rate in the Internet Essentials program.

“The research on the causes of the digital divide is very clear,” said David L. Cohen, Senior Executive Vice President and Chief Diversity Officer of Comcast NBCUniversal.  “One of those reasons is that many low-income households either do not own a laptop or cannot afford to buy one.  As a result, this initiative with Dell Technologies will help us connect more households to the Internet at home so students can do their homework, parents can look for and apply for jobs, and veterans and seniors can keep in touch with friends and family who may be scattered around the world.”

“At Dell Technologies, we believe providing people and communities with access to technology is a critical first step to sparking the kind of innovation that drives human progress.” said Jeremy Ford, Vice President of Giving and Social Innovation at Dell Technologies. “We’re thrilled to be working with Comcast as part of its Internet Essentials program to not only connect more low-income households to the Internet, but also to provide them with the technology they need to thrive in a digital world.”

The announcements follow last year’s extension of eligibility to participate in Internet Essentials to an estimated one million low-income veterans.  To be eligible to apply to the program, a low-income household simply needs to demonstrate its participation in one of more than a dozen different federal assistance programs.  A full list can be found at www.internetessentials.com.

While in Houston, Comcast and Dell Technologies will surprise 300 locals in need with free laptops, including:

Internet Essentials has an integrated, wrap-around design that addresses each of the three major barriers to broadband adoption.  These include: a lack of digital literacy skills, lack of awareness of the relevance of the Internet to everyday life needs, and fear of the internet; the lack of a computer; and cost of Internet service.  As a result, Internet Essentials offers: multiple options to access free digital literacy training in print, online, and in person; the option to purchase an Internet-ready computer for less than $150; and low-cost, high-speed Internet service for $9.95 a month plus tax.  The program is structured as a partnership between Comcast and tens of thousands of school districts, libraries, elected officials, and nonprofit community partners.  For more information, or to apply for the program in seven different languages, please visit www.internetessentials.com or call 1-855-846-8376. Spanish-only speakers can also call 1-855-765-6995.