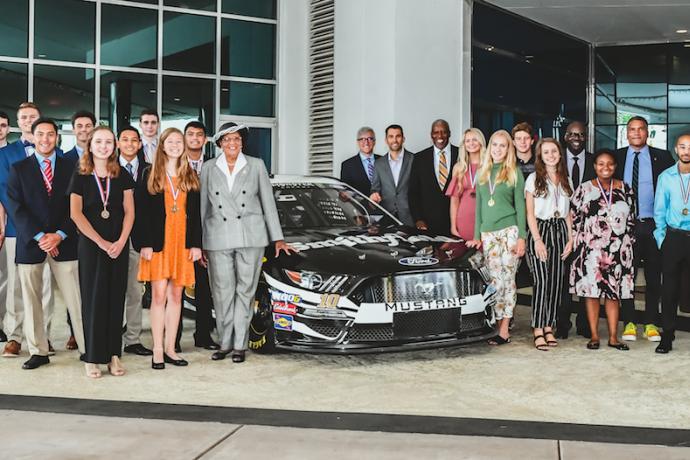 65 youth from across the state were presented with The Congressional Award, Congress’ highest honor for youth. Each recipient challenged themselves personally and engaged with their communities by setting goals in four program areas – Voluntary Public Service, Personal Development, Physical Fitness, and Expedition/Exploration.

Collectively, the students contributed a staggering 14,556 hours of volunteerism to communities near and far.

Congresswoman Adams and Congressman Hudson presented the awards on behalf of the United States Congress and lauded the recipients for taking initiative and considering others in their decision-making.

“As a member of The Congressional Award’s Board of Directors, I am proud to celebrate our state’s youth and their incredible achievements,” said Congressman Richard Hudson. “I was honored to help recognize and congratulate these young men and women for their success and service to our community. They are the leaders of tomorrow."

“It is my honor and privilege to present The Congressional Award to the promising young North Carolinians who earned this recognition in 2019,” said Congresswoman Alma S. Adams, Ph.D. “Each of these young leaders’ dedication to personal development and public service is positively impacting communities across North Carolina. It because of committed young people like this year’s award recipients that I know the future of our democracy is bright.”

The event was made possible by the generosity and leadership of Smithfield Foods, Inc., a global consumer packaged goods and protein company that employs more than 10,000 individuals throughout North Carolina. Smithfield has been involved with The Congressional Award since 2015, and returns this year as the Title Sponsor of the 2019 North Carolina Congressional Award Ceremony. The company maintains a robust sustainability program that includes a dedicated focus on supporting the communities where its employees live and work through engagement, volunteerism, and financial support.

Charlotte Motor Speedway served as the host venue and granted awardees and guests special access to facilities, including The Speedway Club and racetrack.

North Carolina remains one of the most dynamic states in The Congressional Award’s portfolio, with the Charlotte metropolitan area ranking in the top 10 fastest growing regions. The Tar Heel State has produced 2,128 awardees all-time and there are currently 2,369 participants pursuing the award.

The ceremony program and list of Congressional Award recipients can be found here.

About The Congressional Award

The Congressional Award is the United States Congress’ only charity and the highest honor bestowed upon a youth civilian through the U.S. Senate and House of Representatives. Established by Congress as a public-private partnership in 1979 under Public Law 96-114, the program recognizes initiative, service, and achievement in youth ages 13 ½ - 23. Learn more at www.congressionalaward.org.