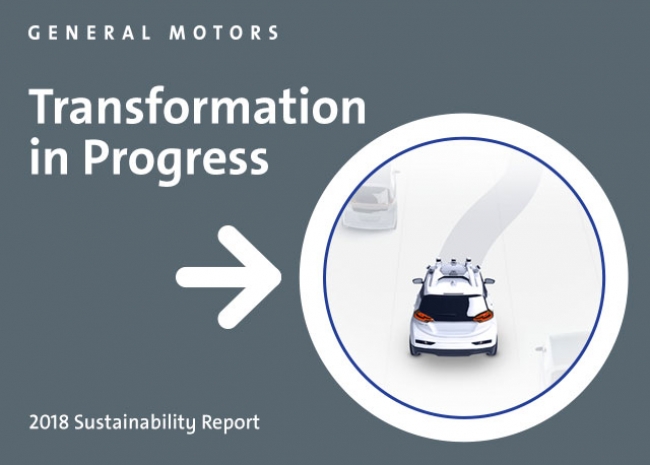 General Motors Co. (NYSE: GM) today released “Transformation in Progress,” its ninth annual sustainability report to update employees, investors, policymakers, advocacy groups and customers on the aggressive moves the company made in 2018 to achieve its vision of a world with zero crashes, zero emissions and zero congestion. The report also extensively covers GM’s drive to build a world-class, inclusive and customer-focused culture with strong corporate governance and transparency.

“For years, we have said that the auto industry is experiencing more change today than in the past 50 years. That pace of change is only accelerating,” said Mary Barra, General Motors chairman and CEO. “With the right team, technology, resources and scale to achieve our vision, I believe the only thing that can stop us is not acting quickly enough. Disruption creates uncertainty, but it also creates vast possibilities that will lead to a better world.”

Results from the 2018 report include:

Learn more about the ways General Motors is driving value through environmental, community and governance factors.

General Motors (NYSE:GM) is committed to delivering safer, better and more sustainable ways for people to get around. General Motors, its subsidiaries and its joint venture entities sell vehicles under the Cadillac, Chevrolet, Baojun, Buick, GMC, Holden, Jiefang and Wuling brands. More information on the company and its subsidiaries, including OnStar, a global leader in vehicle safety and security services, Maven, its personal mobility brand, and Cruise, its autonomous vehicle company, can be found at http://www.gm.com.