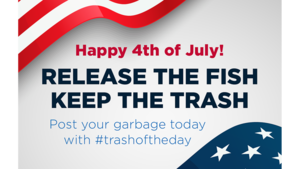 STAMFORD, Conn., Jun. 28 /CSRwire/ -  Keep America Beautiful®, the nonprofit steward of litter prevention for more than six decades, is partnering with Fishbrain, the world’s most popular mobile app and social network for people who love fishing, to ask the app’s more than 8 million users in the United States to undertake the largest-ever crowdsourced audit of litter in the U.S.

This collaboration comes a year after the inaugural event, which took place on the Fourth of July 2018, when 32,800 people took part in the campaign across 575 different fishing locations around the U.S. The 2019 equivalent event, held on and in the days after Independence Day, aims to take advantage of the volume of environmentally conscious anglers who traditionally go out fishing at this time of year.

The Fourth of July is also one of the worst days for littering in America, with National Retail Federation data revealing that more than 66 percent of Americans spend the holiday outdoors at a picnic, many of which are along shorelines of rivers and lakes. With more than $6 billion spent on food and more than $1 billion spent on beer, and with the average American generating 4.4 pounds of waste daily, the amount of trash improperly disposed of during out-of-doors celebrations is a significant problem.

Using Fishbrain’s geolocation feature and the in-app hashtag #TrashOfTheDay, users of the app are encouraged to remove and log littered items they encounter while fishing, and upload images into the app.

The data collected via the Fishbrain app about volumes and locations of trash in America’s waterways, lakes, and shorelines allows Keep America Beautiful to better understand the composition of litter in waterways around the country. This in turn enables their nationwide teams of local volunteers, working with Keep America Beautiful’s more than 600 community-based affiliates, to more effectively focus litter removal and prevention efforts.

Speaking on the partnership, Johan Attby, CEO of Fishbrain, comments: “Seeing so many people come out to clean last year was an inspiration! We think we can really build on this success and harness the power of such a conscientious digital community as Fishbrain users. This is what technology is all about! Bringing people with shared interests and passions together, and harnessing the power of the collective.”

“Keep America Beautiful is keenly interested in preventing land-based litter from flowing to our oceans,” says Keep America Beautiful President and CEO Helen Lowman. “Our partnership with Fishbrain provides us a tremendous opportunity to capture valuable waterway litter data from their fishing community, while they’re out enjoying the Fourth of July holiday and through the rest of the summer.”

In terms of trash collected on Independence Day 2018, over 32,800 people took part in the campaign across 575 different fishing locations around the U.S. California was the most active state when it comes to cleaning up America, with the most trash collected and logged there (especially in Harbor Lake, Los Angeles). California was followed by Texas (with particularly high activity at Lake Corpus Christi), Florida (Halifax River), Utah, and Colorado.

Fishbrain user, Luis from California, uploaded his trash and commented “My sons and I took home two bags of garbage that wasn’t ours today, and I challenge you to make a difference too! Every time you fish the shorelines anywhere, try to leave it cleaner than you found it. We have to preserve our fishing grounds for our kids and grandkids to fish someday.”

About Fishbrain (www.fishbrain.com)
Fishbrain is the world’s most popular mobile app and social network for people who love to fish. Bringing fishing into the digital age, the free-to-use app, with 8 million users worldwide and 5 million in the U.S.,  helps create the best possible fishing experience by providing everyone - whether beginner or pro - with the tools, insights, and support to fully enjoy the world’s most popular sport.

Fishbrain, twice named by WIRED as one of Europe’s Hottest Startups, was founded in Stockholm in 2012, with the app launching in 2013. The startup has fostered a passionate and collaborative community, by helping them take their technique to the next level, arming them with the tools and gear needed to succeed. Fishbrain currently employs over 70 people and is headquartered in Stockholm, Sweden.

In March 2018, Fishbrain raised a $13.5 million Series B round led by B Capital Group (set up by Facebook co-founder Eduardo Saverin) with participation from SoftBank Ventures Korea and existing investors Northzone and Industrifonden. Fishbrain has to-date raised $28 million.

Keep America Beautiful is the nation’s leading nonprofit that brings people together to build and sustain vibrant communities. With a powerful national network of community-based affiliates, we work with millions of volunteers who take action in their communities to transform public spaces into b...