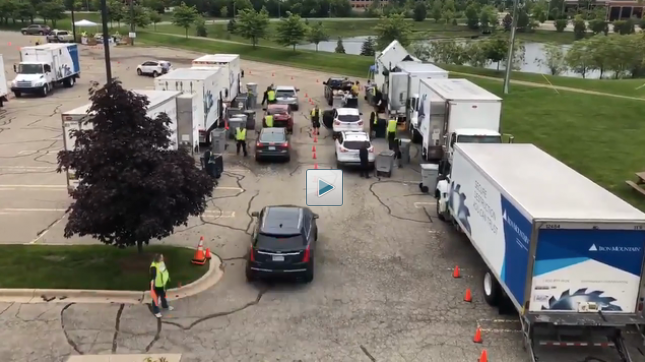 Residents participating in the annual Comerica Bank Shred Day in Southeast Michigan securely shredded approximately 111,000 pounds of documents, which was the largest total collected at a single site by Iron Mountain over the 12-year history of Comerica’s metro Detroit Shred Day.

Held at the bank’s operations center in Livonia, approximately 1,200 vehicles proceeded through the line to take advantage of the free service during the five-hour event. For the first time, Detroit’s Shred Day tallied over 100,000 pounds of documents at one location.

Re-Source Partners, who has assisted Comerica Shred Day since 2015, recycled over 14,000 pounds of electronics and computer equipment, establishing a new record for the largest haul collected during the five-year partnership. Re-Source Partners’ semi-trailer truck reached maximum capacity as the event concluded.

Shred Day not only provided identity protection and contributes to sustainability, but it also produced extraordinary acts of kindness and giving. Residents donated over 3,300 pounds of food and approximately $3,500 in cash donations to Gleaners Community Food Bank. Both totals are the highest amount collected since Shred Day began benefiting Gleaners in 2013.

Combined food and monetary contributions will generate over 13,000 meals for those in need, the highest total recorded over the past seven years and the first time surpassing 10,000 meals.

Shred Day has become a signature community event for Comerica since its launch in Michigan 12 years ago. Shred Days are also held in the Dallas, Houston and Phoenix markets, which play integral roles in Comerica’s corporate sustainability initiatives.

Comerica Bank, a subsidiary of Comerica Incorporated, has served Michigan longer than any other bank with a continuous presence dating back 170 years to its Detroit founding in 1849. It is the largest bank employer in metro Detroit and has more than 4,800 employees (FTE) statewide. With one of the largest banking center networks in Michigan, Comerica nurtures lifelong relationships with unwavering integrity and financial prudence. Comerica positively impacts the lives of Michigan residents by helping customers be successful, providing financial support that assists hundreds of charitable organizations, and actively participating in Detroit’s downtown revitalization. Comerica Incorporated (NYSE: CMA) is a financial services company strategically aligned by three business segments: The Business Bank, The Retail Bank, and Wealth Management. Follow on Facebook: www.facebook.com/Comerica, Twitter: @ComericaBank and Instagram: @Comerica_Bank.