Are water utilities doing the right things to drive toward resilience? 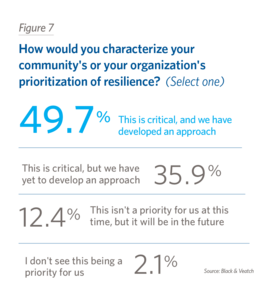 How would you characterize your community's or your organization's prioritization of resilience? (Select one)

Jun. 21 /CSRwire/ - It's been said that Texas suffers perennial drought, broken up by severe floods from time to time. These days, however, Texas isn't alone in its misery.

Researchers from Climate Central analyzed 65 years of rainfall records in the United States and found that 40 of the lower 48 states have seen an increase in heavy downpours since 1950. We're talking about the kind of flood-making torrential events that exceed the top 1 percent of all rain and snow days. And droughts are frequent, too. During the second half of 2012, more than half of the land area in the United States suffered from a drought ranked moderate or worse.