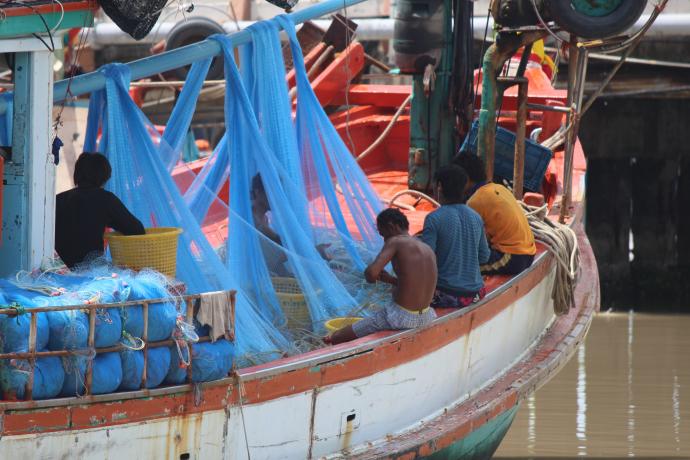 Thailand is a source, transit and destination country for traffickers seeking higher profits by using slave labor. A study funded through the Foundation’s first grant, focused on slave labor in the fishing industry, surveyed migrant fishermen who worked on Thai fishing boats from 2011–2016. The study found that labor trafficking was widespread with frequent patterns of abuse, and the majority of laborers averaged 16-hour working days.

In an environment of isolation and exploitation, paired with a criminal justice system that does not enforce existing anti-trafficking laws or hold criminals accountable, slavery thrives.

Through the second grant from the Foundation alongside a grant from the U.S. Department of State Office to Monitor and Combat Trafficking in Persons, IJM has laid the foundation for a long-term regional anti-trafficking program which transcends national borders and requires a response as agile and networked as the traffickers that operate in the Myanmar and Cambodian recruitment corridors. IJM's local team of law enforcement development, legal, aftercare and case management professionals have proactively developed relationships and credibility with key government agencies and partner organizations, in order to help police build cases against cross-border trafficking networks and ensure that bilateral, cross-border law enforcement and prosecution efforts actually work. Additionally, IJM has bolstered services for survivors returning to source countries, like Cambodia, after exploitation and provided training for partners on victim sensitivity and trauma-informed care.

In May 2019, IJM supported the Department of Special Investigation, Royal Thai Police, Office of Attorney General, Ministry of Social Development and Human Security, and Ministry of Labor in achieving a landmark conviction of a Cambodian national who was a key player within a cross-border trafficking network responsible for transporting hundreds, if not thousands, of Cambodian migrant workers, and selling them to captains and owners of Thai fishing vessels. The court also ordered the trafficker to pay around 500,000 baht in compensation to each victim in the case (approximately US $15,000), and in a precedent-setting decision the Thai government awarded each survivor additional victim compensation from the government’s trafficking in persons fund.

This is a strong sign of forward momentum in the way that both source countries, like Cambodia, and destination countries, like Thailand, can collaborate in cross-border cases of human trafficking. It serves to build the community’s confidence in the justice system and encourage more victims to come forward to report cases and support enforcement efforts.

“Because of the Walmart Foundation’s investments in IJM over the last several years, there are men who are now protected from forced labor slavery, and a powerful trafficker is in jail. When laws are enforced, ending slavery becomes possible,” said Andrey Sawchenko, Field Office Director, IJM Bangkok. “But, we are never going to achieve systemic, sustainable change without partnerships that span both the public and private sectors, so we are grateful to the Walmart Foundation for positively impacting the entire seafood sourcing industry through their strategic focus on advancing supply chain sustainability and funding support to IJM.”

When corporations encourage rule of law in the nations where they operate and urge the government to enforce existing anti-trafficking laws and encourage robust civil society participation, an enabling environment is created – laws are enforced, traffickers are deterred from illegally sourcing slave labor, capacity to respond and serve vulnerable groups is fostered and businesses can gain more transparency in their global supply chains.

“We are encouraged by the substantial progress IJM has been able to make on combatting forced labor over the last two years, and we are hopeful that the momentum will continue to create results at an even faster rate,” said Karrie Denniston, Senior Director, Walmart.org, which represents the philanthropic efforts of Walmart and the Walmart Foundation. “We believe in the role philanthropy can play to support strategic and collaborative efforts with needed resources that help secure such positive outcomes as has occurred in Thailand in the past month. Philanthropy can serve as a catalyst to support stronger systems for example by investing in infrastructure, skills and capacity building so these outcomes can be replicated in other places.”

Walmart.org is focused on strengthening demand for responsible labor practices, investing in data and transparency, enhancing worker and community engagement and supporting strong policy and regulation.

International Justice Mission is the largest international anti-slavery organization working in 19 program offices in 11 countries across the developing world to combat slavery, trafficking, and other forms of violence against the poor. IJM works to rescue and restore victims, hold perpetrators accountable, and help transform broken public justice systems. Learn more at www.ijm.org.

About Philanthropy at Walmart

Walmart.org represents the philanthropic efforts of Walmart and the Walmart Foundation. By leaning in where our business has unique strengths, we work to tackle key social issues and collaborate with others to spark long-lasting systemic change. Walmart has stores in 27 countries, employing more than 2 million associates and doing business with thousands of suppliers who, in turn, employ millions of people. Walmart.org is helping people live better by supporting programs that work to accelerate upward job mobility for frontline workers, address hunger and make healthier, more sustainably-grown food a reality, and build strong communities where Walmart operates. To learn more, visit www.walmart.org or find us on Twitter @Walmartorg.