UPS Makes Largest Purchase of Renewable Natural Gas Ever in the U.S. 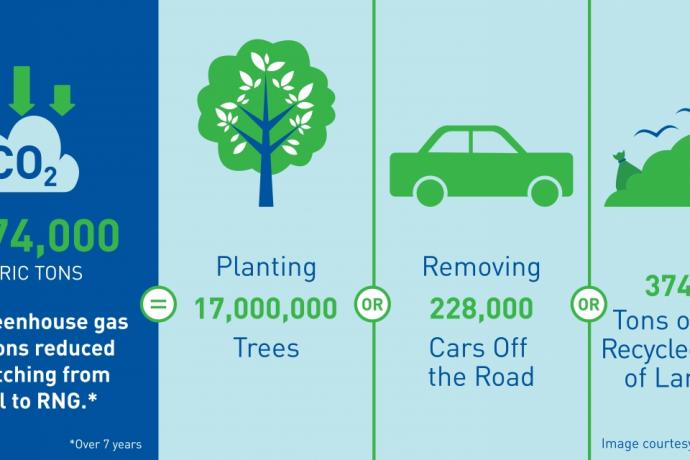 UPS (NYSE: UPS) today announced an agreement with Clean Energy Fuels Corp. (NASDAQ: CLNE) to purchase 170 million gallon equivalents of renewable natural gas (RNG) through 2026. This is the largest commitment for use of RNG to date by any company in the United States, with a range of 22.5 - 25 million gallon equivalents per year. RNG is a key part of UPS’s strategy to increase alternative fuel consumption to be 40% of total ground fuel purchases by 2025, supporting the logistics leader’s efforts to reduce the absolute greenhouse gas (GHG) emissions of its ground fleet 12% by 2025.

“The world has a trash problem. And the world has an emissions problem. Renewable natural gas, produced naturally from bio sources such as landfills and dairy farms, not only turns trash to gas, but it turns it into clean gas,” said Mike Casteel, UPS director of fleet procurement. “Since RNG is supported by existing national infrastructure used to transport natural gas, it’s a winning solution that will help UPS to reach our ambitious sustainability goals. At the same time, we hope our unprecedented seven-year commitment serves as a catalyst for wider adoption of RNG by other companies.”

UPS has used more than 28 million gallons of RNG in its ground fleet since 2014. This means the company will now be using nearly as much RNG in one year as it has used over the past five years combined. By switching from diesel fuel to RNG, UPS vehicles fueling at 18 company-owned and operated natural gas stations across 12 states will realize a significant reduction in greenhouse gas emissions, as much as 1,074,000 metric tons of GHG over the life of the agreement. This is equivalent to planting 17,000,000 trees, removing 228,000 cars off the road or recycling 374,000 tons of waste that would otherwise be sent to the landfill.

Clean Energy, co-founded by T. Boone Pickens and Clean Energy President and CEO Andrew J. Littlefair, is the exclusive provider of Redeem™ RNG, the first RNG made available in commercial quantities. According to Clean Energy, Redeem™ RNG yields at least a 70% reduction1 in lifecycle greenhouse gas emissions when compared to conventional diesel or gasoline. Also known as biomethane, RNG can be derived from many abundant and renewable sources, including decomposing organic waste in landfills, wastewater treatment and agriculture. It is then distributed through the natural gas pipeline system, making it available for use as liquefied natural gas (LNG) or compressed natural gas (CNG).

“Together, UPS and Clean Energy are moving the industry forward and toward a nation of energy independence by pushing for RNG at scale,” said Tyler Henn, vice president and general manager of Clean Energy Renewables, a division of Clean Energy. “We’re excited to deliver Redeem to a partner with a substantial alternative fleet and an ongoing commitment to RNG. We’re pleased to be able to fulfill the growing demand for RNG as more fleets seek a clean, economical alternative.”

UPS drives more than 6,100 CNG and LNG vehicles which can be powered by RNG in Argentina, Belgium, Canada, France, Germany, the Netherlands, Thailand, the United Kingdom, and the United States. More than 22% of the conventional diesel and gasoline fuel previously used by UPS’s ground fleet is now being replaced by alternative fuels including renewable natural gas and renewable diesel. This is significant because of RNG’s staggering reduction in lifecycle greenhouse gas emissions when compared to conventional diesel.

Since 2009, UPS has invested more than $1 billion in alternative fuel and advanced technology vehicles and fueling stations globally. UPS deploys the more than 10,000 vehicles in its Rolling Lab to utilize technologies that work best depending on the needs of the delivery route. From old-fashioned pedal power and electric-assisted bicycles in dense urban areas like Seattle, London and Hamburg to electric and hybrid electric vehicles in the U.S., and natural gas, renewable natural gas and propane globally, UPS puts sustainability innovation into action, all over the world.

UPS (NYSE: UPS) is a global leader in logistics, offering a broad range of solutions including transporting packages and freight; facilitating international trade, and deploying advanced technology to more efficiently manage the world of business. UPS is committed to operating more sustainably – for customers, the environment and the communities we serve around the world. Headquartered in Atlanta, UPS serves more than 220 countries and territories worldwide. UPS was awarded America’s Best Customer Servicecompany for Shipping and Delivery services by Newsweek magazine; Fortune magazine’s Most Valuable Brand in Transportation; and top rankings on the JUST 100 list for social responsibility, the Dow Jones Sustainability World Index, and the Harris Poll Reputation Quotient, among other prestigious rankings and awards. The company can be found on the web at ups.com or pressroom.ups.com and its corporate blog can be found at longitudes.ups.com. The company’s sustainability eNewsletter, UPS Horizons, can be found at ups.com/sustainabilitynewsletter. Learn more about our sustainability efforts at ups.com/sustainability. To get UPS news direct, follow @UPS_News on Twitter.

UPS is a global leader in logistics, offering a broad range of solutions including transporting packages and freight; facilitating international trade, and deploying advanced technology to more efficiently manage the world of business. Headquartered in Atlanta, UPS serves 10.6 million customers daily in more than 220 countries and territories worldwide.