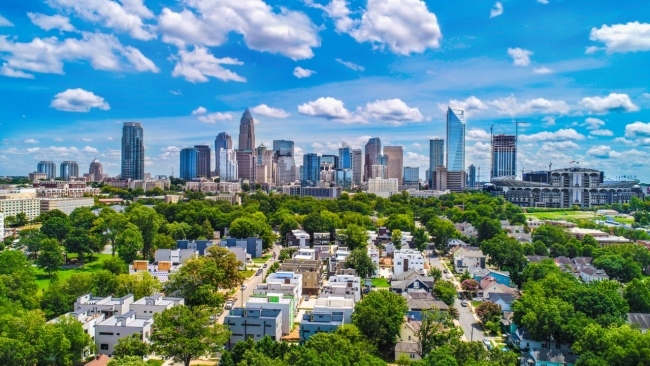 The Arbor Day Foundation has announced today that the City of Charlotte has been awarded the Foundation’s Champion of Trees Award. This award recognizes a government entity, community-based organization, or partnership among such groups that has demonstrated exemplary leadership to develop and implement new policies and practices for municipal tree planting and care, natural area stewardship or arboriculture. The award will be presented on May 13 at an award reception for the City of Charlotte at the Charlotte Mecklenburg Government Center.

The City of Charlotte, North Carolina, is being honored for its Tree Canopy Preservation Program (TCPP) which preserves natural areas in the city through voluntary purchases or easements, paid for by fees collected from developers. Since 2014, the city has protected 221 acres, an area three times larger than what would have been protected through traditional tree preservation codes, and acquisitions are targeted for environmental attributes rather than left to developer choice.

“One of Charlotte’s most notable features are the stately, old trees that make up the city’s urban forest,” said Dan Lambe, president, Arbor Day Foundation. “Charlotte has one of the most expansive tree canopies in the country. We are proud to recognize the city’s creative and thoughtful approach to finding a sustainable way to allow the city to grow and still maintain its beautiful canopy.”

Community trees remove pollutants from the air, improve water quality, reduce stormwater runoff and lower energy use — providing economic and environmental benefits citywide. In the U.S., urban trees provide more than $2.4 trillion in environmental services. Charlotte has one of the most expansive tree canopies in the country, with 47% canopy coverage. The city receives more than $335 million in environmental benefits and services every year from its trees. The city wants to reach 50% canopy coverage by 2050 as part of its master urban forest plan.

This award winner is one of six being honored for their outstanding contribution to tree planting, conservation and stewardship. The remainder of the 2019 Arbor Day Award winners will be presented with their award during their local Arbor Day celebrations. More information can be found at arborday.org/programs/awards.

Founded in 1972, the Arbor Day Foundation has grown to become the largest nonprofit membership organization dedicated to planting trees, with more than one million members, supporters and valued partners. Since 1972, more than 300 million Arbor Day Foundation trees have been planted in neighborhoods, communities, cities and forests throughout the world. Our vision is to help others understand and use trees as a solution to many of the global issues we face today, including air quality, water quality, a changing climate, deforestation, poverty and hunger.

As one of the world's largest operating conservation foundations, the Arbor Day Foundation — through its members, partners and programs — educates and engages stakeholders and communities across the globe to involve themselves in its mission of planting, nurturing and celebrating trees. More information is available at arborday.org.