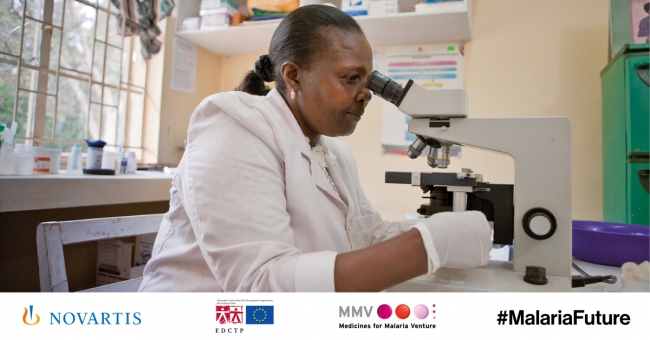 The European & Developing Countries Clinical Trials Partnership (EDCTP) has granted new funding of €10m over five years to support late-stage clinical trials of a next-generation antimalarial combination including KAF156 (ganaplacide). The trials will be conducted in four countries in West and Central Africa: Burkina Faso, Gabon, Mali and Niger.

Led by the WANECAM consortium (West African Network for Clinical Trials of Antimalarial Drugs), ten academic organisations[1] based in Africa and Europe will collaborate with the not-for-profit organization Medicines for Malaria Venture (MMV) and the pharmaceutical company Novartis to develop its compound KAF156 in combination with a new formulation of lumefantrine. The aim is to advance the development of a much-needed new antimalarial therapy while strengthening clinical trial development capabilities in Africa.

Global partnerships have made significant strides in malaria control over the past 20 years, yet the rate of progress has recently diminished[2]. A recent survey of African malaria leaders[3] showed high levels of concern around resistance to some of the current gold-standard treatments, artemisinin combination therapies (ACTs), in Asia, and the likelihood that it could spread to Africa, emphasizing the urgent need for novel, easy-to-administer antimalarial medicines.

The Principal Investigator, Professor Abdoulaye Djimdé of the L'Université des Sciences, des Techniques et des Technologies de Bamako and coordinator of the WANECAM group, said: “We welcome the generous support from EDCTP and are grateful for their long-term commitment to clinical development in Africa – and specifically supporting clinical research in critical diseases such as malaria. This backing is vital to accelerate the development of this much-needed new compound. African collaboration with a group of international experts on this programme can help ensure the trials are completed rapidly and to the highest quality standards. With reports about parasite resistance to artemisinins and ACTs, it is essential that we have new antimalarials ready and waiting.”

KAF156[4], the new antimalarial compound that will be studied, holds the potential to be the first new chemical class of compound for the treatment of acute malaria in 20 years, which in combination with the new formulation of lumefantrine could be administered as a single-dose treatment. The combination is currently in late-stage clinical trials across 17 centres in nine countries in Africa and Asia. It is being developed by Novartis with scientific and financial support from MMV (in collaboration with the Bill & Melinda Gates Foundation), and is one of seven late-stage antimalarials being developed by MMV partnerships. The EDCTP grant will fund two clinical trials for KAF156 in combination with a new formulation of lumefantrine which will include studying its effectiveness in children, the group most at risk of dying from malaria. If successful, data from these trials will support future submissions to register the medicine with regulatory authorities.

The EDCTP funding will also support efforts to strengthen clinical research infrastructure in Niger, as well as existing clinical research capacities at all other trial sites involved. These efforts will involve exchanging experiences and best practices between the sites and the European academic centres, as well as with Novartis and MMV.

Dr. Michael Makanga, EDCTP Executive Director, said: “We are delighted to broaden the coalition of organisations that EDCTP funds and partners to deliver our malaria strategy. By involving the private sector and a not-for-profit PDP, we have broadened our network of expertise. With all sectors working together, we can build stronger partnerships to defeat malaria.”

By 2017, malaria mortality had more than halved in sub-Saharan Africa compared to the turn of the century, due to better prevention, mainly via bednets, and improved treatment with ACTs. However, over 400,000 people died due to malaria-related causes that year, most of them young children under the age of five. The most recent 2018 World Malaria Report stated that progress in the fight against the disease is flattening for the second year in a row.

[4] KAF156 (ganaplacide) is the result of a Welcome Trust, MMV and Singapore Economic Development Board supported joint research program with the Novartis Institute for Tropical Diseases, the Genomics Institute of the Novartis Research Foundation, and the Swiss Tropical and Public Health Institute.

Details of trials to be funded

The EDCTP grant will fund two trials of KAF156 in combination with a new formulation of lumefantrine:

Recruitment into the first trial is expected to start in early 2020.

Appendix - list of EDCTP-funded partner organizations, their websites and quotes: