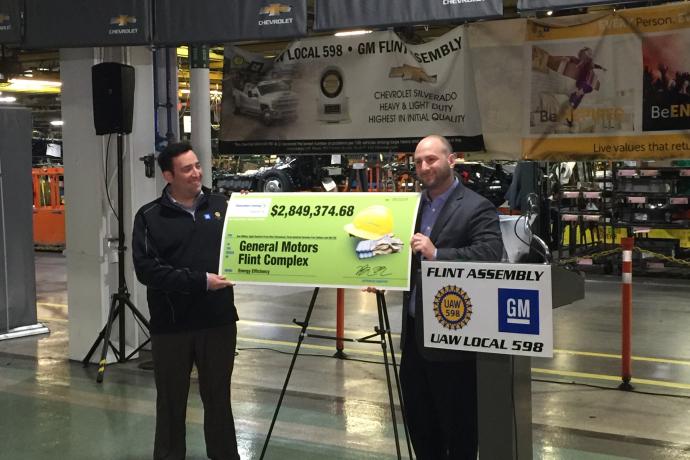 Officials from Consumers Energy today presented General Motors with a payment worth over $2.8 million for energy-saving upgrades at the automaker’s Flint facilities that benefit the planet and Michigan’s prosperity.

“General Motors has made a commitment to sustainability, and we are pleased to work with them to take actions that are good for their customers and all of Michigan,” said Brian Rich, Consumers Energy’s senior vice president for customer experience.

In the last decade, General Motors has received $13.3 million in payments from Consumers Energy for upgrades at its Michigan plants that reduce energy use. The Flint upgrades alone will save enough electricity to power about 1,600 houses and natural gas to heat about 550 homes.

“GM Flint Assembly’s commitment to sustainability enables us to develop an energy-efficient work environment for our team,” said Michael Perez, GM Flint Assembly plant manager. “Our relationship with Consumers Energy allows us to continue to identify new opportunities to reduce and reuse energy.”

Consumers Energy has helped Michigan homes and businesses save over $2 billion in costs since 2009 through its energy efficiency programs and rebates.

“General Motors is an example to all businesses, large and small, of how to take control of energy use and reduce costs while protecting the planet,” Rich said. “They show it’s possible to make decisions that are good for business and the environment.”

General Motors (NYSE:GM) is committed to delivering safer, better and more sustainable ways for people to get around. General Motors, its subsidiaries and its joint venture entities sell vehicles under the Cadillac, Chevrolet, Baojun, Buick, GMC, Holden, Jiefang and Wuling brands. More information on the company and its subsidiaries, including OnStar, a global leader in vehicle safety and security services, Maven, its personal mobility brand, and Cruise, its autonomous vehicle ride-sharing company, can be found at http://www.gm.com.