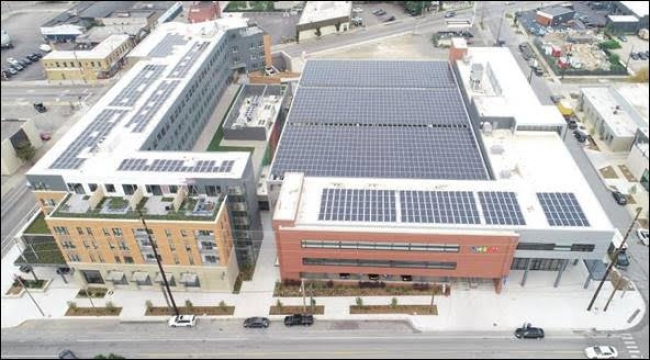 Circuit West features 500 kilowatts of rooftop solar power between Bridge and First streets in Grand Rapids. A new energy storage battery is located a block away from the array.

Nearly 1,800 solar panels atop the Bridge Street Market and adjoining buildings between Bridge and First Streets within the Circuit West district are accompanied nearby by a 500-kilowatt battery. It’s the first such energy distribution setup in Michigan and one of the first in the country intended to make renewable energy increasingly reliable and cost effective.

“Today, there is very little storage on the grid, so electricity is generated just moments before you use it,” said Garrick Rochow, Consumers Energy’s senior vice president of operations. “With large batteries, we will make our grid more efficient, effective and sustainable. It’s a critical part of Michigan’s energy future and it’s happening here at Circuit West.”

Stabenow was joined by leaders from Consumers Energy, Rockford Construction and the City of Grand Rapids to announce the electric distribution and storage system today at the West Michigan Center for Arts and Technology, 614 First Street NW, one of the many new buildings springing up within Circuit West.

“This rooftop solar array can power up to 100 homes and is part of Consumers Energy’s commitment to increasing our use of renewable energy to 40 percent and ending our use of coal to generate electricity,” Rochow said. “Our Circuit West work is putting into action our triple bottom line of People, the Planet and Prosperity.”

The Circuit West battery, which goes into commercial operation in a few weeks, joins a 1-megawatt battery installed last fall at the company’s Parkview Substation on Western Michigan University’s Kalamazoo campus. Rochow said Consumers Energy is studying each battery’s performance to determine how to best use and integrate the technology across the electric distribution grid.