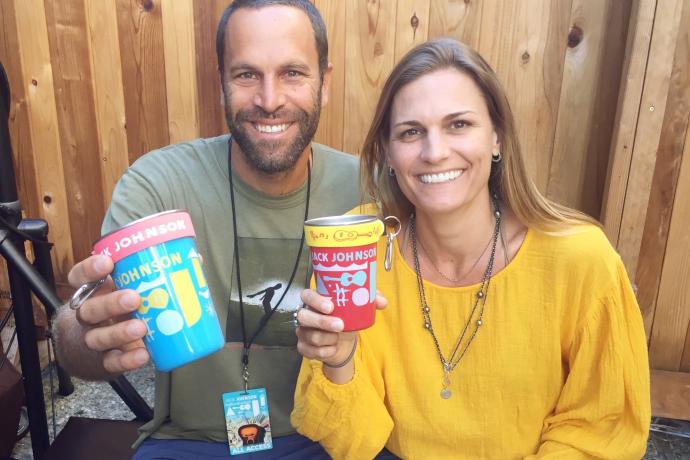 Hawaii-based multi-platinum recording artist, Jack Johnson, and his wife, Kim Johnson, lead a plastic-free toast with reusable pint cups produced by Steelys Drinkware to cut single-use plastic waste during the Jack Johnson All The Light Above It Too tour

In his latest ambitious sustainability initiative, Hawaii-based multi-platinum recording artist, Jack Johnson, executed a reusable pint cup program that reduced a substantial amount of single-use plastic waste during his recent All The Light Above It Too tour.

A video documenting the program can be viewed at:

A typical fan attending a concert, sporting event, or other live event uses one or more single-serving disposable cup or bottle, generating billions of pieces of plastic waste at venues annually. More broadly, Americans use more than 100 million single-use plastic cups on a daily basis. According to the U.S. EPA, much less than 20% of our plastic waste is ever recycled — resulting in wasted resources, glutted landfills, and plastic and chemical pollution in our oceans and terrestrial environments.

Jack Johnson and his team chose Steelys® Drinkware, a San Francisco-based wholesale supplier of zero waste drinkware and accessories, to manufacture more than 70,000 custom reusable pint cups for the tour. Made of durable food-grade stainless steel, the Jack Johnson pint cups are decorated with playful and colorful ocean-themed graphics that integrate with the tour’s broader merchandise program.

The reusable steel cups were available for purchase at all U.S. shows, as an alternative to conventional single-use plastic cups, which would otherwise be used for beverage service. The tour also gifted thousands of reusable pints to fans as an incentive to take environmental action and make plastic free commitments at the Village Green at each show, as part of Johnson’s All At Once campaign.

The Jack Johnson 2017-2018 All The Light Above It Too World Tour sold or gave away 71,376 steel pints during U.S. dates, eliminating the need for more than 200,000 single-use plastic cups at shows. The waste reduction extends beyond the tour, however, as many venues and promoters have embraced the reusable cup concept, and thousands of fans have committed to refill and reuse their Jack Johnson pint cups in their daily lives.

“It feels really good to look out at the audience this time around and see so many people with the reusable cups,” said Johnson. “We’re part of an industry that produces a lot of plastic, so I’m grateful to all the venues and fans that have embraced this idea. I think the demand we’ve seen for the pints shows that it’s not really so hard to offer alternatives that are better for the planet. And if given the option, a lot of people will choose to refill and reuse.”

The Jack Johnson World Tour began June 14, 2017 in New York and concluded Sept. 2, 2018 in New Mexico, traveling to 47 North American cities and 28 locations abroad. The reusable pint cup program focused on U.S. venues on the tour. Among the highlights of the tour were three 100% Plastic Free Jack Johnson shows at Santa Barbara Bowl, where virtually no single-use plastic waste was produced.

Jack Johnson and his wife, Kim, have been leading and influential proponents of sustainable touring for the past 15 years. The reusable pint cup program was the signature element of the Jack Johnson 2017-2018 Tour’s greening initiatives, which also included: recycling, composting, carbon offsets, eco-friendly tour merchandise, sourcing of sustainable local food, free water refill stations, elimination of plastic straws and other single-use items, support for All At Once Non-Profit Partners in each city, and fan engagement to encourage personal environmental commitments.

“Jack’s zero waste cups raise environmental awareness in a subtle way that’s fun for fans, and viable for venues — which normally have to deal with truckloads of plastic waste after every show,” said John Borg, founder of Steelys Drinkware. “We’ve been helping green music festivals and tours for almost a decade, but we’ve never worked with an artist or crew so committed to supporting alternatives to single-use plastics. With Jack and Kim behind it, the reusable pint cup program is driving positive change in the music industry and beyond.”

Jack Johnson grew up surfing and playing guitar in Hawaii.  Since 2001, he has released 6 studio albums and 2 live albums that have sold over 25 million copies worldwide. His Brushfire Records label and touring crew have been leaders in the greening of the music industry and his All At Once social action network connects fans with local non-profits at each tour stop, provides free water refill stations at shows to cut plastic waste, and engages fans to make environmental commitments. Jack, with his wife Kim, founded the Kokua Hawaii Foundation to support environmental education in Hawaii's schools and communities, as well as the Johnson Ohana Foundation to support environmental, art and music education worldwide. The total of these album and tour profit donations, along with Johnson’s personal charitable activities, have resulted in over $30 million donated to charity since 2001. All The Light Above It Too is Johnson’s first release since 2013’s chart topping From Here To Now To You.

Based in San Francisco, Steelys Drinkware is a wholesale supplier of reusable, food-grade stainless steel cups, bottles, drinking straws, and food containers that minimize society’s reliance on single-use plastic goods. Working on the front lines of the zero waste movement, Steelys has pioneered the design of custom reusable food and beverage service items that provide alternatives to conventional single-use plastics and help divert trash from landfills, save resources, and cut pollution. Steelys’ mission is to design and produce durable reusable products that meet the highest standards for health, safety, sustainability & corporate social responsibility. Steelys are manufactured at select factories vetted for social and environmental compliance, and the brand has print production and distribution facilities in California, Minnesota, and North Carolina. Founded in 2010 by sustainable merchandise designer, John Borg, Steelys are distributed exclusively through Eco Imprints, Inc.

In addition to the video link embedded in the announcement, 2 photos accompanying this story are available for editorial use at https://steelysdrinkware.com/blog/