Overall, Americans are less likely to be green, support charities and shop responsibly than in years past. Yet, "socially conscious" consumers still represent majority of U.S. population. 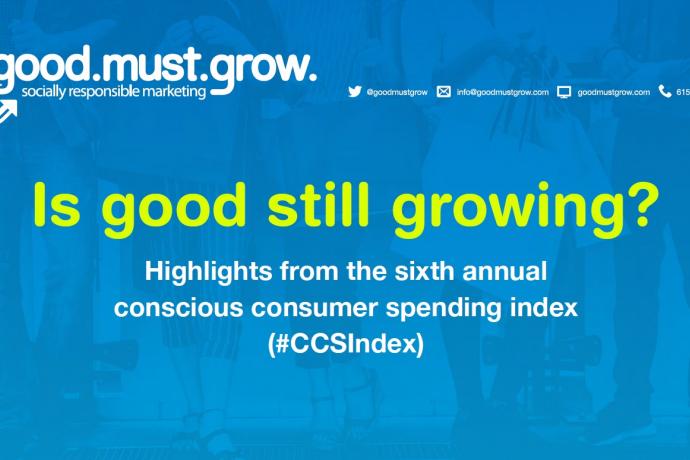 Americans are doing fewer good deeds these days, according to the sixth annual Conscious Consumer Spending Index (#CCSIndex). In total, 1,015 Americans were recently polled for the ongoing benchmarking study, which is conducted by Good.Must.Grow., a socially responsible marketing consultancy.

This year’s results marked record lows for the percentage of Americans who report being green, reducing consumption of energy/goods, contributing money or time to a nonprofit and buying products or services from socially responsible companies. The biggest declines came from charitable donations, which fell from 63 percent in 2017 to 54 percent in 2018, and being green, which fell from 87 percent to 80 percent.

Still, when asked to rank how socially conscious they are when shopping, Americans averaged a response of 6.5 on a 10 point scale. In fact, 85 percent of Americans graded themselves at a 5 or higher on the scale. Meanwhile, 32 percent of Americans are planning to spend more with companies who are socially responsible in the year ahead and 32 percent reported boycotting products and services that were not socially responsible this past year. Both are record highs for the index.

“This year’s findings are a mix of new highs and all-time lows, so it’s obviously not all good news,” said Heath Shackleford, founder of Good.Must.Grow. “On a positive note, the majority of Americans still identify as being conscious consumers and are rewarding mission-driven organizations. But from a trending perspective, we are seeing a mild dip in socially responsible behaviors. We need to take that seriously and respond accordingly.”

Overall, the #CCSIndex slipped to its lowest point since its inaugural results with a score of 45 on a 100-point scale. This comes after a slight rebound from 46 in 2016 to 47 in 2017. The #CCSIndex score is calculated by evaluating the importance consumers place on purchasing from socially responsible companies, actions taken to support such products and services, and future intent to increase the amount they spend with responsible organizations. Based on the design of the index’s algorithm, even a one-point change in overall score indicates meaningful movement of consumer sentiment.

“This index isn’t about proving that doing good is good for business; that has been done many times over,” said Shackleford. “The purpose of our research is to take an objective and critical view of what we need to do as a collective to fuel this movement as we move forward.”

Is the World Getting Worse?

When asked if the world was becoming a better place to live, a worse place to live or staying the same, only 22 percent believed the state of the world was improving. That was up from 16 percent in 2017, but still represented a significant minority of Americans.

This impacts the #CCSIndex score because those with a negative or neutral outlook on the state of the world are less likely to purchase products from “do good” companies, less likely to donate time and money to nonprofits and less likely to report being green.

The Price Is Not Right

“Bottom line, it costs more to produce high-quality, ethically-sourced, environmentally-friendly products that give back to the community, but clearly we have to examine how high those costs climb,” said Shackleford. “Past research has confirmed that consumers are willing to pay a premium for socially responsible products, but the rub is that the average consumer can’t afford to spend $250 on a hand-crafted pair of dress shoes or $65 on a bamboo t-shirt or $20 on a pair of socks. Yet, a growing number of socially-conscious products are priced as luxury brands and are out of reach for many Americans.”

A Loss of Confidence

In 2018, 67 percent of consumers said that individuals are effective at making positive changes in society. This is a down from 72 percent in previous years and marks the first decline since the inception of the index. During this time, confidence in nonprofits and social enterprises has been dipping, while opinions have held steady regarding major corporations.  Belief in the government’s ability to drive change has fluctuated between lows of 36 percent (2014) and highs of 43 percent (2016 and 2018).

“Consumers seem to have less confidence in their ability to make a difference at the individual level,” said Shackleford. “Revitalizing the belief that ‘we the people’ can create change every day is an area of opportunity. Americans spent $643 million dollars before lunch this past Black Friday alone. The truth is that individuals are in the best position to drive the change we need.”

Hanging in the Balance

Nearly half (49%) of Americans rated themselves between 5-7 on the 10-point scale mentioned previously. This group possesses socially responsible values but isn’t fully acting on those values consistently. They are less likely to shop responsibly, be green or give to charity than those who rated themselves 8-10 on the scale (which represented 36% of the population). This group was also much less trusting of companies and had far less confidence in the ability of individuals to drive change when compared to the 8-10 group.

“A large percentage of Americans are wired for good, but currently they have a few of those wires crossed,” said Shackleford. “Despite the downturn in the data, we have a remarkable opportunity to mainstream conscious consumerism. I think there are several takeaways from this year’s research, and areas of focus, that will help activate the segment of the population that is currently stuck in neutral when it comes to social responsibility.”

This year marked the #CCSIndex’s fourth annual top 20 “Good Company” poll, compiled by responses to the question, “What company or organization do you think of first when you think of socially responsible companies/organizations?” Based on unaided recall, organizations were ranked by how frequently they were named.

Walmart completed its surprising climb up the list, claiming the top spot and edging the combination of Amazon and Whole Foods*. Last year’s leader, The American Red Cross, slid to number five. In 2018, 40 percent of respondents failed to name a socially responsible organization, up from 30 percent in all previous polls.

*Based on Amazon’s acquisition of Whole Foods, the #CCSIndex team chose to combine responses for those two brands. Without the combination, Amazon would have ranked third, Whole Foods 14th. Wegman’s would have been removed from the list.

About the Study
This study was conducted in partnership with Supportive Research Solutions and What They Think Research. Sampling was provided by Research Now. Data was collected Nov 8-16, 2018. In total, 1,015 Americans were surveyed (margin of error is +/- 3%). For more information on the Conscious Consumer Spending Index, please visit www.goodmustgrow.com/ccsindex

About Good.Must.Grow.
Doing good by any means necessary. That’s our motto. We are obsessed with helping good organizations grow. We provide strategic marketing support for socially responsible businesses, nonprofit causes and individuals committed to making our world a healthier place. We also fuel our own initiatives aimed at specific causes, ranging from human trafficking to addiction to health and wellness. Proud to be a Certified B Corp. Learn more at goodmustgrow.com.