HP, the Clooney Foundation for Justice, UNICEF and Google.org Shine Spotlight on Education 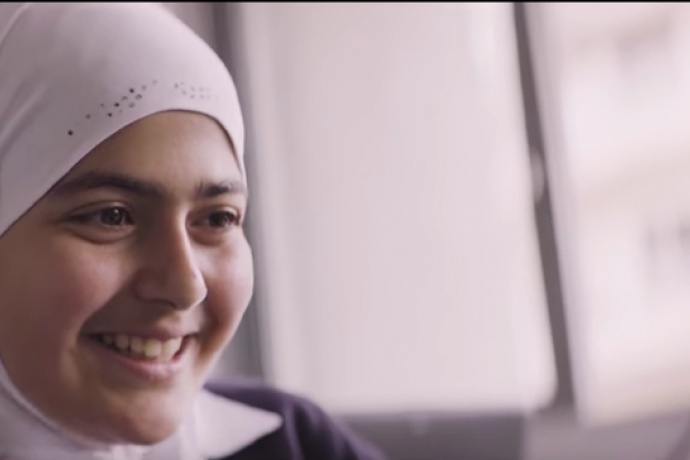 Today, on the International Day of the Girl, HP Inc. launched a powerful new film titled A Generation Found. The film, narrated by George Clooney, tells the story of two young Syrian girls living in refugee settlements in Lebanon who regain access to quality education following years of uncertainty. It is the result of a unique partnership between HP, the Clooney Foundation for Justice (CFJ), UNICEF and Google.org focused on improving educational opportunities and learning outcomes for underserved communities.

More than 65 million people around the world have been forcibly displaced, a record high since World War II, according to the U.N. Refugee Agency. Five million of those have been displaced from Syria since 2011, and more than a million are now living in Lebanon. An estimated 200,000 of these refugees are children. Only a small number of refugees – less than one percent of 17.5 million in 2016 – will ever be resettled.

Four years ago, Marah, a 12-year-old fourth grader, and her family were uprooted by the violence in Syria. And Rawaa, a 12-year-old second grader, was living with her family in the countryside near the southern Syrian city of Aleppo when the fighting broke out and forced their displacement. Marah and Rawaa were at risk of becoming part of the “lost generation” of Syrian refugees who might grow up without the basic human right of education.

But now, as the film reveals, thousands of young Syrians living in Lebanon are getting back to school. Education plays a critically important role in creating opportunities and enabling a more just, equitable and inclusive society. HP and its partners are supporting the broader goal to enable better learning outcomes for 100 million people by 2025.

Through this unique partnership, new technology is being used in nine public schools across Lebanon, from Beruit to the Beqaa Valley, and will reach nearly 3,500 Syrian refugee students, as well as thousands of Lebanese students and teachers as the program is now deployed for its first full school year. The nine schools often serve Lebanese learners in the morning, and then operate a “second shift” to serve Syrian students.

HP is also providing teacher training, curriculum planning support and – a first for these students –  laptops, which will be used daily in every classroom. By equipping classrooms with the latest educational technology and giving teachers the proper training and tools, HP and its partners are providing new ways of learning for not just the students who attend second shifts in the afternoon, but for all of the students in each of the nine schools.

Today, with the culmination of more than a year’s work between the organizations in Lebanon, HP not only celebrates and amplifies the voices and stories of strong girls and refugees around the world, but it also seeks to shift mindsets and reinvent the way people think about refugees. Join us in changing perceptions – and changing the dialogue – as we highlight their stories, hopes and dreams.

About the Clooney Foundation for Justice

The Clooney Foundation for Justice was established in late 2016 by George and Amal Clooney to advance justice in courtrooms, classrooms, and communities around the world. Having helped public schools in Lebanon open additional doors to Syrian refugee children for the past academic year, CFJ is proud to bring state of the art technology to those classrooms this year.  For more information on the Foundation and its work, please visit www.cfj.org.

HP Inc. creates technology that makes life better for everyone, everywhere. Through our portfolio of printers, PCs, mobile devices, solutions and services, we engineer experiences that amaze. More information about HP Inc. is available at http://www.hp.com.