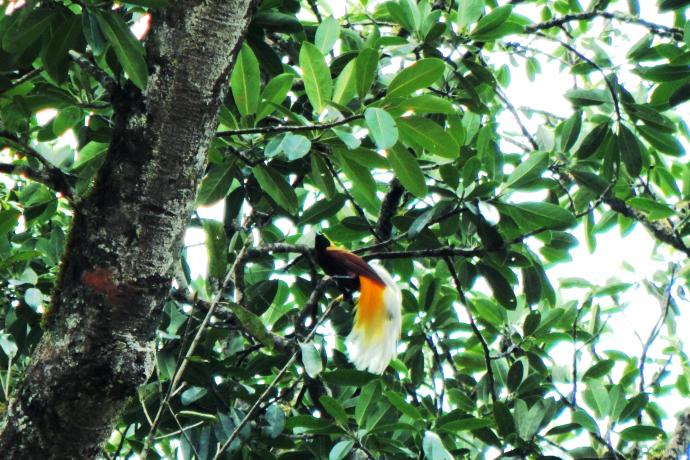 The paradisaea minor or bird of paradise seen in the concession. Pic: Rahmat and TBI

The Forest Stewardship Council’s (FSC) recent addition of Indonesia’s P.T. Wapoga Mutiara Timber Unit II (WMT II), to its to its ever-growing family of FSC-compliant forest management (FM) concessions is of special significance in a country that has the second worst rates of tropical deforestation.

According to the World Resources Institute (2018), Indonesia has the world’s 3rd largest tropical forest, yet, ranks 2nd in the world for tropical deforestation.

The new certificate is not just an important step towards expanding FSC’s mission of sustainable forestry practices, but also a chance to change the status quo of deforestation in the country. With WMT’s certificate, Indonesia now has over 3.2 million hectares of FSC certified forests.

WMT II, which annually produces around 55,000 cu.m. of mostly Merbau wood, has been supported by The Borneo Initiative since 2011, enabling their certification process. Technical assistance towards the certification was provided by The Forest Foundation.

This responsible forest management certificate means that FSC has added to its already expansive fold a forest concession of 167,923 ha in Indonesia’s Sarmi district, Papua province.

Indonesia is a hotspot for global deforestation, with half of Sumatra’s forest cover having disappeared between 1985 and 2008, according to the UN’s Food and Agriculture Organization—its forest cover went from 50 per cent to 25 per cent. The FAO’s State of the Forest (2011) report also states that 498,000 ha. of the country’s forests are degraded each year.

“FSC congratulates P.T. Wapoga Mutiara Timber Unit II on achieving FSC certification. We are also grateful to have a staunch supporter and solid partner in The Borneo Initiative, which has done exemplary work in strengthening sustainable forest management practices in Indonesia. This partnership reflects the power of multi-party stakeholder engagement in contributing to responsible forest management, especially in the biodiverse tropics of Indonesia,” says Kim Carstensen, FSC Director General.

Announcing the certification of WMT II, Iwan K. Permadi, The Borneo Initiative’s Program Coordinator for Indonesia said, “The company first achieved FSC Controlled Wood certificate in 2016, then, within 2 years, with continued commitment of WMT II, the company managed to advance their performance and achieved full FSC Forest Management certification in 2018.”

He has also expressed that the initiative’s experience in assisting WMT II toward sustainable forest management has also better equipped them to assist other similar forest concessions in the future.

The Forest Stewardship Council (FSC) is a global not-for-profit organization dedicated to promoting environmentally sound, socially beneficial and economically prosperous management of the world's forests. FSC was created in 1994 to help consumers and businesses identify products from well-managed forests and sets standards by which forests are certified, offering credible verification to people who are buying wood and wood products.