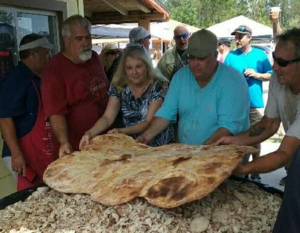 "It’s truly remarkable to be a part of an event that is a world-record-breaking success, not just for the participants, but for the entire community,” said Kevin Ladd, Southern Event and Party. “We’re grateful for partners like Smithfield Foods, Pleasant’s BBQ, Wildes Tavern, and Overtime Sports who helped make this achievement possible. It’s amazing to see the positive impact we can make when we all come together.”

“As a food company, we believe that it is our greatest responsibility to feed people,” said Jonathan Toms, associate manager of charitable initiatives for Smithfield Foods. “Smithfield is honored to be a participant in this Guinness World Record win, not for the title, but for those in need we were able to assist along the way.”