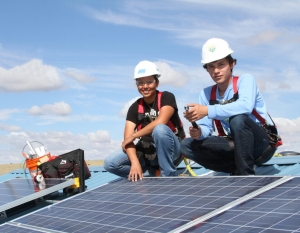 The donation to nonprofit GRID Alternatives, a national leader in making solar technology and training accessible to underserved communities, supports the founding of GRID’s new Tribal Solar Accelerator Fund. The fund is an extension of GRID’s National Tribal Program and aims to catalyze the growth of solar energy and expand solar job opportunities on tribal lands.

“Our strong relationships in Indian Country and with our Native American customers are a point of great pride at our company,” said Mary Wenzel, head of Sustainability and Corporate Responsibility at Wells Fargo. “We are pleased to have such an effective working relationship with GRID Alternatives and to provide the seed funding for its Tribal Solar Accelerator Fund. We sincerely believe that providing no-cost solar and job-training opportunities in tribal communities will address critical needs and accelerate the transition to a low-carbon economy.”

Support for the Tribal Solar Accelerator Fund is a significant component of Wells Fargo’s $50 million philanthropic commitment to help address the unique economic, social, and environmental needs of American Indian/Alaska Native communities that was announced last year. Wells Fargo has been a major supporter of GRID’s state- and national-level programming since 2012.

GRID Alternatives’ national Tribal Program has worked since 2010 to help tribes achieve their renewable energy goals with solar, while training tribal members to enter the solar workforce. GRID has installed nearly 3 MW of solar capacity in partnership with more than 40 tribes to date. The new fund will expand GRID’s work and provide much-needed capital to support the development of new projects around the U.S.

“Many tribes are looking to renewable energy to address both environmental and economic challenges in their communities,” said Adam Bad Wound, Vice President of Development for GRID Alternatives. “Access to funding is often the biggest barrier to achieving their goals, and we’re excited to be able to partner with even more tribes to move their solar PV projects forward.”

The Spokane Tribe in Wellpinit, Washington, will be the first to benefit from the Tribal Solar Accelerator Fund, with a grant that will unlock third-party investment capital and $1 million in matching funds from the Department of Energy for a 637 kilowatt solar project. When complete, the project will provide clean power and reduced energy bills for 14 tribal buildings, including elder housing, community facilities and tribal administrative offices.

“After a near disaster during the 2016 Cayuse Mountain Fire, the Tribe now places a premium on energy self-sufficiency,” said Tim Horan, Executive Director of the Spokane Indian Housing Authority. “We expect solar to play a big role in helping us achieve this, and the grant from the Tribal Solar Accelerator Fund was the last piece of the puzzle to make our first big project happen. We’re grateful to Wells Fargo and GRID Alternatives.”

The Spokane project, dubbed “Children of the Sun Solar Initiative” will be installed by GRID’s tribal team, which has already installed solar on five homes on the reservation. It is expected to break ground this fall, and will include hands-on solar training for tribal members and students.

Other projects slated for funding in 2018 will be announced in the coming weeks. An open application process for 2019–20 will launch early next year. For more information, visit www.tribalsolar.org.

Wells Fargo & Company (NYSE: WFC) is a diversified, community-based financial services company with $1.9 trillion in assets. Wells Fargo’s vision is to satisfy our customers’ financial needs and help them succeed financially. Founded in 1852 and headquartered in San Francisco, Wells Fargo provides banking, investment and mortgage products, as well as consumer and commercial finance through more than 8,300 locations, 13,000 ATMs, the internet (wellsfargo.com) and mobile banking, and has offices in 38 countries and territories to support customers who conduct business in the global economy. With approximately 265,000 team members, Wells Fargo serves one in three households in the United States. In 2017, Wells Fargo donated $286.5 million to 14,500 nonprofits and Wells Fargo team members volunteered a record 2 million hours. Wells Fargo’s corporate social responsibility efforts are focused on three strategic priorities: diversity and social inclusion, economic empowerment, and environmental sustainability. News, insights and perspectives from Wells Fargo are also available at Wells Fargo Stories.