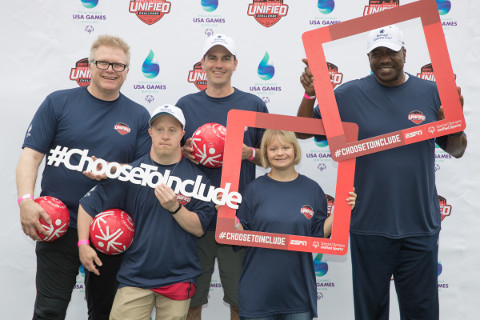 “It was an honor to support and participate in the Special Olympics in our hometown of Seattle alongside Lauren and all of the inspiring athletes who show what can be accomplished with hard work, dedication and giving it everything you have,” said Ashford. “The Special Olympics embody what it means to be inclusive, compassionate and accessible, and we will continue to support its mission and advocate opportunities for all.”

As a presenting sponsor, Holland America Line supported the Seattle Art Mural project. Under the guidance of Seattle-based artist Catherine Mayer, 20 Special Olympics Washington athletes participated in three workshops to create art murals for the 2018 USA Games. Mayer assembled the 26-foot-long murals that were displayed around Seattle and at the Healthy Athletes venue at the USA Games. A seven-day cruise also was donated for a photo contest in the I’m a Game Changer campaign, which recognized unsung heroes working on behalf of people with intellectual disabilities.

About Holland America Line [a division of Carnival Corporation and plc (NYSE:  CCL and CUK)]
Holland America Line’s fleet of 14 ships offers more than 500 cruises to more than 400 ports in 98 countries, territories or dependencies around the world. From shorter getaways to 113-day itineraries, the company’s cruises visit all seven continents, with highlights including Antarctica explorations, South America circumnavigations, Cuba cruises and exotic Australia/New Zealand and Asia voyages; four annual Grand Voyages; and popular sailings to the Caribbean, Alaska, Mexico, Canada and New England, Bermuda, Europe and the Panama Canal. The line welcomed Koningsdam in 2016 and has a second Pinnacle-class ship, Nieuw Statendam, to be delivered in December 2018. A third Pinnacle-class ship is due for delivery in 2021.

The company is undergoing $300 million in brand enhancements to secure its position as the leader in premium cruising. Fleetwide, the ships feature innovative initiatives and a diverse range of enriching experiences focused on destination immersion and personalized travel. Guests can expand their knowledge through an exclusive partnership with O, The Oprah Magazine; during an America’s Test Kitchen show; at Explorations Café presented by The New York Times; and by taking a Digital Workshop powered by Windows. Outstanding entertainment fills each evening at venues including Lincoln Center Stage, Billboard Onboard and B.B. King’s Blues Club. The dining experience can be savored at a variety of restaurants with menus that feature selections from Holland America Line's esteemed Culinary Council, comprising world-famous chefs who design dishes exclusively for our guests.

We at Carnival Corporation & plc believe that sustainability is about preserving our environment, respecting our employees and communities, and returning value to our shareholders. Sustainability is not a cost of doing business; it is a way of doing business. As one of the largest vacation companies in the world, Carnival has been committed since our inception to operating responsibly.

We recognize that our success is tied to protecting the environment, safeguarding and developing our workforce, strengthening stakeholder relationships, enhancing the port communities that we visit and maintaining our fiscal strength. We also recognize that, in today’s business climate, the viability of our business as well as our reputation depends on being more sustainable and transparent.

For more information on what Carnival has done and is doing to protect the environment, please see Carnival Corporation’s Sustainability Website.