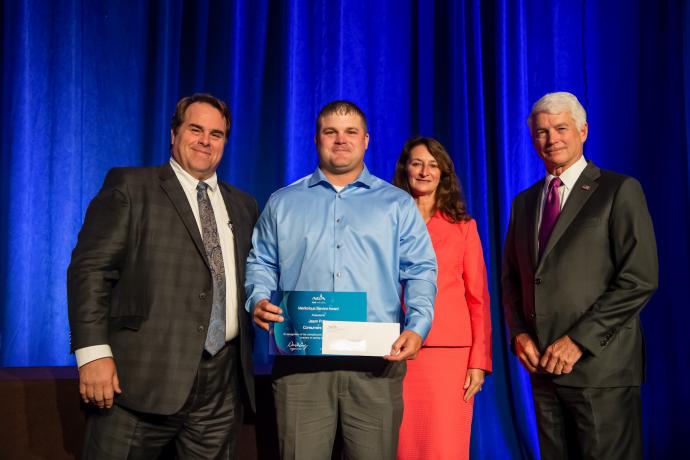 A Consumers Energy employee from Clio is the recipient of the 2018 American Gas Association Meritorious Service Award for his lifesaving efforts to assist a woman involved in a serious car accident.

Jason Potter was one of five Consumers Energy employees nominated for the award which honors those in the natural gas industry “who demonstrate exceptional judgment in saving a human life.” Also nominated were Dan T. Brown, James Stratton, Charles Hale and Ace Castle. This prestigious award is given to one individual nationwide based on a review by American Gas Association staff.

Potter, a pipeline excavator operator, was commuting to his Birch Run work location via Interstate 75 during the summer of 2017 when the routine drive changed in an instant as he witnessed a car accident. A speeding vehicle clipped a car, causing it to spin out of control and roll several times.

Turning on his vehicle’s flashers and parking in the slow lane to block traffic, Potter rushed to the crashed vehicle that had come to rest on the driver’s side door. He was horrified to see blood everywhere, a result of the driver’s arm being pinned between the vehicle’s roof and the ground.

“My first thought was to get her out of there because this car was going to catch on fire. Luckily, another guy stopped to help. We picked up the vehicle and pried the door open to free her arm from underneath,” Potter said.

The unconscious woman was pulled from the car. Potter tore off his shirt and used it as a tourniquet along with using his hands to squeeze the artery under the woman’s arm to help stop the severe bleeding while another motorist called 9-1-1.

“Two months earlier we went through a refresher in CPR training at work,” he said. “So it was fresh in my mind, and my instincts took over.” The injured driver regained consciousness and panicked. Potter calmed her down and continued to hold pressure on her artery until paramedics arrived. She survived the accident.

Potter credits his safety training at Consumers Energy as the reason he was able to stay calm during a potentially deadly event. “We’re trained to pay attention to every little detail about our safety,” he said.

That ability to stay calm and focus on the details under pressure contributed to Potter rising to the top of many deserving nominees for the AGA Meritorious Service Award. “I am humbled and honored to receive this award, and am grateful I was in the right place at the right time to be able to help,” Potter said.

At Consumers Energy all union field employees and first line supervisors receive mandatory first aid, CPR, Automated External Defibrillator (AED) and blood borne pathogens training, which is annually reviewed. This training is also offered to other employees as requested. Mandatory training is given to about 3,000 employees annually, and to another 300 non-union employees.

“We are so proud of Jason and all the nominated employees. Their actions exemplify the caring professionalism we want all our employees to embrace,” said Charles Crews, vice president of gas operations for Consumers Energy. “At Consumers Energy safety is always our top priority. We don’t just say this, we demonstrate it daily, as exhibited by Jason and his co-workers who did not hesitate to help those in need.”