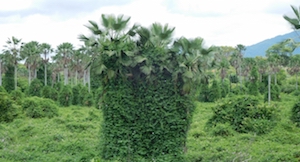 As part of SC Johnson’s efforts to protect natural resources for future generations, the company today announced it has provided a grant of 1.2 million Brazilian reals ($370,000) to the Centre for Agriculture and Biosciences International (CABI). The grant will help drive research in the management and control of the Devil’s claw vine (Cryptostegia madagascariensis), an exotic invasive weed that currently threatens the unique Caatinga ecosystem, including the native Carnaúba palm (Copernicia prunifera), in northeastern Brazil.

“The aggressive nature of the Devil’s claw vine if left unchecked can have a devastating impact on the local diversity of plant life, resulting in a loss of native vegetation, including the Carnaúba palm,” said Fisk Johnson, Chairman and CEO of SC Johnson. “This important endeavor will help recover the health of the Caatinga forest and sustain the Carnaúba palm for generations to come.”

This initiative is co-funded by the Agência do Desenvolvimento do Estado do Ceará (ADECE) and SINDCARNAÚBA, the Carnauba Wax Refiners Syndicate of Ceará, and coordinated from the Brazilian side through the Associação Caatinga. Joint funds will help establish three monitoring stations in Ceará for baseline and long-term research into the invasion by the Devil’s claw vine and develop a weed management strategy that aims to introduce and disperse a rust fungus (Maravalia cryptostegiae) to potentially control the vine.

The Devil’s claw vine is a climbing weed from Madagascar with no natural damaging enemies in Brazil. The vine is typically defined by its bell-shaped purple flowers, which usually bloom after heavy rains. Once established, the Devil’s claw vine can flower most of the year and its seeds are spread via wind and waterways. It is known for smothering surrounding plants, including the iconic Carnaúba palm, which is also an important economic plant in Ceará as a source for wax. The vine deprives plants of light and carbon dioxide, can topple trees by its sheer foliage weight, and is known to prevent access to waterways and reduce grazing land available to livestock. The milky sap, or latex, is also poisonous.

The rust fungus, which is native to Madagascar, will be assessed as a potential biological control agent by CABI in the United Kingdom to ensure that the fungus will only attack the Devil’s claw vine. Following field collection of the rust in Madagascar, stringent safety testing will be conducted under quarantine conditions in the U.K. If approved for release by the Brazilian government, the fungus is expected to cause defoliation of the plant, which will reduce plant growth, flowering and seed production – ultimately curbing the invasion in the Caatinga ecosystem.

“This investment will help to address a growing issue that is having a detrimental impact on the native flora and fauna of the Caatinga. If left unchecked, this invasive weed will continue to spread into new areas in Brazil,” said Dr. Harry Evans, Emeritus Fellow, Invasive Species Management Team, CABI. “Reducing the growth and invasion of the Devil’s claw vine is essential to ensuring the long-term health of the Caatinga, and potentially of other Brazilian ecosystems.”

Called the “White Forest” by native populations, the Caatinga ecosystem covers an estimated 11 percent of Brazil and is spread across the states of Alagoas, Bahia, Ceará, northern Minas Gerais, Maranhão Paraíba, Piau, Pernambuco, Rio Grande do Norte and Sergipe. This dry forest is home to the largest populations of Carnaúba palms in the world. It also has some of the world’s most diverse plant life and its biodiversity is critically important to maintaining the variety of animals native to the region, such as the emblematic three-banded armadillo.

SC Johnson has played a significant role in protecting the environment in Brazil for more than eight decades. From the original Carnaúba expedition in 1935, to its contributions to protecting two reserves in Brazil’s Caatinga ecoregion in the 1990s, and the creation of The Fund for Conservation of Caatinga Association, a group dedicated to studying and protecting the region’s environmental landscape, the company has significantly invested in the region. Additionally, SC Johnson donated 18,000 acres of Caatinga land to The Nature Conservancy. In 2017, the company partnered with Conservation International to help conserve more than 100,000 acres of land – much of that in the Amazon region.

SC Johnson is a family company dedicated to innovative, high-quality products, excellence in the workplace and a long-term commitment to the environment and the communities in which it operates. Based in the USA, the company is one of the world's leading manufacturers of household cleaning products and products for home storage, air care, pest control and shoe care, as well as professional products. It markets such well-known brands as GLADE®, KIWI®, OFF!®, PLEDGE®, RAID®, SCRUBBING BUBBLES®, SHOUT®, WINDEX® and ZIPLOC® in the U.S. and beyond, with brands marketed outside the U.S. including AUTAN®, TANA®, BAMA®, BAYGON®, BRISE®, KABIKILLER®, KLEAR®, MR MUSCLE® and RIDSECT®. The 132-year-old company, which generates $10 billion in sales, employs approximately 13,000 people globally and sells products in virtually every country around the world. www.scjohnson.com

About Centre for Agriculture and Biosciences International (CABI)

CABI is an international not-for-profit organization that improves people’s lives by providing information and applying scientific expertise to solve problems in agriculture and the environment.

Through knowledge sharing and science, CABI helps address issues of global concern such as improving global food security and safeguarding the environment. We do this by helping farmers grow more and lose less of what they produce, combating threats to agriculture and the environment from pests and diseases, protecting biodiversity from invasive species, and improving access to agricultural and environmental scientific knowledge. Our 48 member countries guide and influence our core areas of work, which include development and research projects, scientific publishing and microbial services.