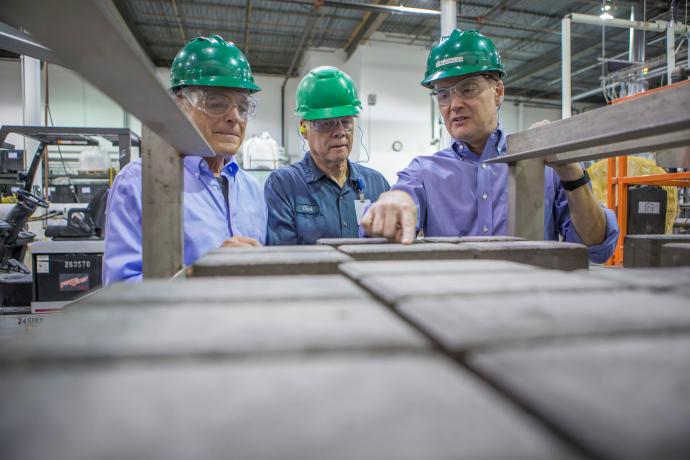 “The cement sector is facing a significant expansion at a time when its emissions need to fall fast,” according to Chatham House. “Shifting to a Paris-compliant pathway, with net-zero CO2 emissions by around 2050, will require going further and moving faster on all available solutions, as well as making sure that the next generation of innovative technology options is ready as soon as possible.”

The report is based on “a major patent-landscaping exercise around innovation in clinker substitution and novel cements – examining where and why laboratory-based breakthroughs are happening, the kinds of firms involved, and which innovations have the potential to cross the ‘valley of death’ (the name given to the phenomenon in which innovations do not make it past the technology-creation stage) and make a meaningful impact on emissions pathways.”

Patent landscaping involves creating databases of patents for individual sectors or ‘technology areas.’ It is used to measure innovation, as well as to understand systems of innovation.

Currently, patents for clinker reduction outnumber the patents for novel cement. Yet the report found that smaller companies with attractive and innovative patent portfolios have gained both financial and technical support from industry leaders. As a low-carbon option, Solidia Technologies® was showcased in the report as a viable solution with big potential impact and an extensive IP portfolio.

“Solidia has 14 issued patents in the US and 75 worldwide for technology that reduces CO2 emissions during the production of cement and captures CO2 during concrete curing,” said Solidia’s Chief Technology Officer Nick DeCristofaro, Ph.D. “Bringing sustainable innovation to a market that hasn’t been disrupted in 200 years is challenging. The support we receive from government, academia and industry players such as LafargeHolcim is critical to advancing R&D, scaling the technology, and helping the industry meet its emissions-reduction goals.”

As detailed by Chatham House: “Each year, more than 4 billion tonnes of cement are produced, accounting for around 8% of global CO2 emissions. Steeper reductions will be required if assumptions about the contribution from carbon capture and storage (CCS) technologies prove to be optimistic. Meanwhile, investors are increasingly expecting companies to report clear information on their exposure to climate risk. The trends all point to regulatory, financial and societal pressures on the horizon, especially for cement companies without a detailed plan for a Paris-compliant pathway.”

To address the cement industry’s goal of reducing its carbon footprint, Solidia’s patented technology starts with an energy- and CO2-saving cement. It then uses this cement to produce a concrete that cures by a reaction with CO2 instead of with water. These capabilities combine to reduce the carbon footprint of cement and concrete by up to 70%. It also offers the ability to recycle up to 80% of the water used in concrete production. Using the same raw materials, mixing equipment, and forming processes as traditional concrete, the resulting CO2-cured concrete is more durable than traditional concrete, costs less to produce, and cures in less than 24 hours.

“As our systems add value and reduce costs for both cement and concrete manufacturers, they require neither carbon taxes, nor penalties, nor public subsidies to facilitate adoption,” explained Dr. DeCristofaro.

About Chatham House
Chatham House, the Royal Institute of International Affairs, is an independent policy institute based in London. Our mission is to help build a sustainably secure, prosperous and just world. We engage governments, the private sector, civil society and our members in open debate and private discussions about the most significant developments in international affairs. Each year, the institute runs more than 300 private and public events – conferences, workshops and roundtables – in London and internationally with partners. Our convening power attracts world leaders and the best analysts in their respective fields from across the globe. Our research work focuses on independent and rigorous analysis of critical global, regional and country-specific challenges and opportunities.