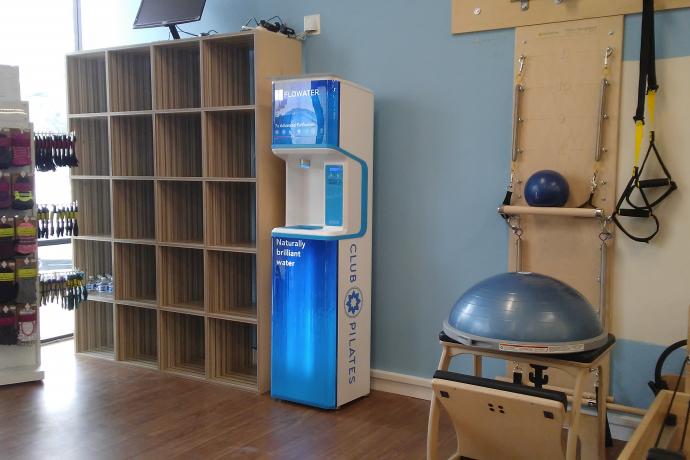 Set to scale on a global level, Xponential Fitness today announces plans to deploy FloWater Refill Stations at up to 3,000 franchise locations in the US over the next three years. Parent company of premium fitness brands Club Pilates, CycleBar, RowHouse, Stretch Lab and AKT, Xponential has committed with FloWater to providing a better drinking water experience, one that will begin to wean the fitness industry off its plastic water bottle.

“The consumer dynamic has shifted, especially in the fitness industry. They expect better, more sustainable operations and amenities from great brands like ours,” says Xponential CEO and Founder Anthony Geisler. “With FloWater Refill Stations, we meet this demand, and our customers will enjoy the world’s best-tasting water that has been enhanced with numerous health benefits that they will appreciate.”

With new and innovative water purification technology, FloWater Refill Stations completely eliminate the need for plastic bottles by transforming ordinary tap water into the purest, best-tasting water available. During purification, the FloWater technology alkalizes and oxygenates the water and adds minerals and electrolytes for better hydration. A coconut carbon filter ‘finishes’ the water for a clean, crisp taste. Different from other water delivery systems, FloWater Refill Stations are also self-sanitizing and feature an on-demand delivery system that provides perfectly chilled water in less than 10 seconds.

The initial rollout is taking place at Club Pilates, with FloWater Refill Stations now set as the brand standard for all new Xponential franchise locations in the US.

“As an early adopter in its industry, Xponential is at the forefront of the widespread consumer movement demanding an end to single-use plastic waste. FloWater has created a new water delivery system that makes both consumers and the environment happier,” says FloWater CEO and Co-founder, Rich Razgaitis.

FloWater is on a mission to eliminate 1 billion single-use bottles by 2023, and, since its launch in 2013, has already eliminated over 35 million at leading corporations like Red Bull, Microsoft, Target, and at hotels, schools, events and retail outlets nationwide.

About Xponential Fitness:
Founded in 2017, Xponential Fitness is the curator of the leading brands across every vertical in the boutique fitness industry – including Pilates, cycling, assisted-stretching and rowing. Currently, Xponential Fitness' portfolio of brands includes Club Pilates, the nation's largest and fastest growing Pilates franchise, CycleBar, the first and only premier indoor cycling franchise, L.A.-based StretchLab, a concept offering assisted stretching services, and most recently, Row House, a powerful & effective low-impact cardio rowing concept, focused on camaraderie and performance and most recently, AKT, a dynamic, functional movement based dance concept, deeply rooted in science and community..

About FloWater
Incubated in Silicon Valley, FloWater was incorporated in 2013 by a passionate team that believes everyone deserves access to clean, great-tasting water wherever they are, every day. Transforming ordinary tap water that’s available everywhere, FloWater's proprietary, 7-filter water purification and enhancement system eliminates the contaminants that can be found in tap water and delivers superior drinking water that dispenses into any size reusable container, eliminating the plastic waste and toxicity caused by single-use plastic water bottles. For more information on FloWater, please visit www.myflowater.com.

The World’s Best-Tasting, Most Sustainable Water.

FloWater is the best-tasting, healthiest water on the planet, for a fraction of the cost of bottled water, and 100% less plastic waste.