Performance & Sustainability Win in Goodyear Tires Made With U.S. Soy

Submitted by United Soybean Board 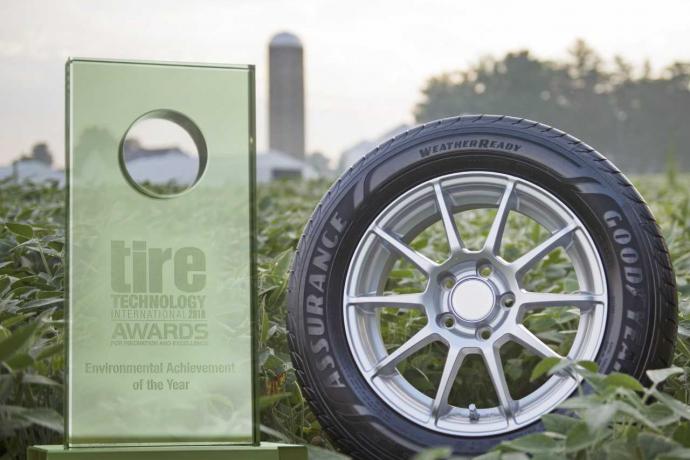 In this new video fleet leaders and individual drivers can see a new award-winning choice for tires that deliver both performance and sustainability. Goodyear Tire & Rubber Company’s cooperation with the United Soybean Board (USB) yielded a first for the tire industry. Following extensive experiments, lab testing, road testing and more, Goodyear has introduced soy-based technology in its Assurance WeatherReady™ tires, a broad line tire that covers 77 percent of cars, SUVs, crossovers, pickups and minivans.

Goodyear joined USB at the Transportation Energy Partners Energy Independence Summit in Washington, D.C. to share the good news with Department of Energy Clean Cities coalitions from across the nation. Goodyear Chief Engineer, Polymer Science and Technology Robert A. Woloszynek also announced the company will expand its line of tires containing soy with the addition of Eagle® Enforcer All Weather™ for police vehicles that count on high-performance traction and handling.

“Innovation and agriculture grew together through the United Soybean Board’s work with Goodyear,” said United Soybean Board Chairman Lewis Bainbridge, a South Dakota soybean grower.  “Now major fleets, police departments and the general public can benefit from enhanced tire performance as well as the environmental value of this technology.”

“In a typical tire, the amount of petroleum oil is around 8 percent. In the Assurance Weather Ready, we were able to replace about 60 percent of that oil with soybean oil, which included 100 percent of the oil in the tread compound,” said Goodyear Chief Engineer, Polymer Science and Technology Robert A. Woloszynek.

Wins ‘Environmental Achievement of the Year’ Award
The breakthrough with soybean oil as a replacement for petroleum oil resulted in Goodyear receiving the prestigious Tire Technology International Award for Innovation and Excellence in the category of 'Environmental Achievement of the Year' on 2018 Tire Technology Expo on February 22 in Hannover, Germany.

“Our work with the United Soybean Board presented a unique challenge and opportunity for our material scientists and tire engineers to employ soybean oil in the development of superior performing tires,” said Chris Helsel, Goodyear's chief technology officer. 'It is exciting to see that work payoff with commercially successful products, and an honor to be recognized by the industry for the environmental achievement.”

“Goodyear's innovative industrialization of soybean oil technology proves that research and development in sustainable materials can benefit not only the environment, but also tire performance. I believe that this type of 'win-win' innovation will increasingly become the norm, rather than the exception, in the tire industry of the future,' said Graham Heeps, editor, Tire Technology International and chairman of the judging panel.

Go to www.soybiobased.org for up-to-date lists of Goodyear tires that contain soybean oil

U.S. soybean farmers have invested millions of dollars to research, test, and promote biobased products. Much of this work was done through the United Soybean Board (USB), which is composed of 73 U.S. soybean farmers appointed by the U.S. Secretary of Agriculture to invest soybean checkoff funds.

The 73 farmer-directors of USB oversee the investments of the soy checkoff to maximize profit opportunities for all U.S. soybean farmers. These volunteers invest and leverage checkoff funds to increase the value of U.S. soy meal and oil, to ensure U.S. soybean farmers and their customers have the freedom and infrastructure to operate, and to meet the needs of U.S. soy’s customers. As stipulated in the federal Soybean Promotion, Research and Consumer Information Act, the USDA Agricultural Marketing Service has oversight responsibilities for USB and the soy checkoff.

More from United Soybean Board