Submitted by Save the Redwoods League 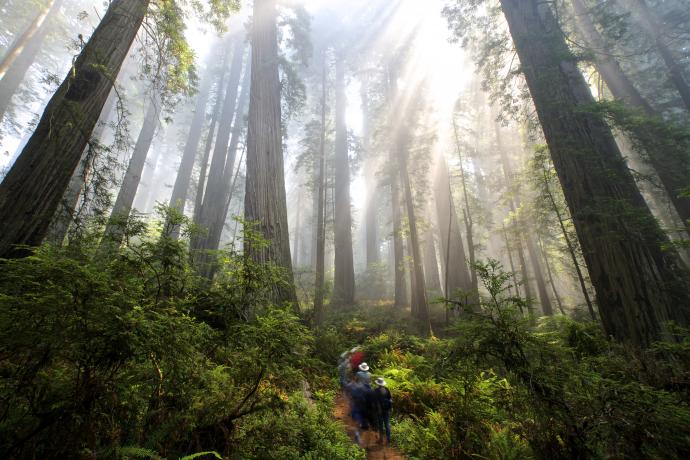 Save the Redwoods League is celebrating 100 years of protecting and restoring redwood forests in 2018.

Save the Redwoods League and Earth Day San Francisco (EDSF) announced that the League will unveil the first-ever State of Redwoods Conservation Report as a centerpiece of EDSF’s 9th Annual Festival April 21 at San Francisco’s Civic Center Plaza, from 11 AM to 7 PM.

“Our philosophy is to celebrate the most important organizations and trends in the Bay Area environmental movement on Earth Day,” said Laird Archer, co-director of EDSF. “Last year it was March of Science because of the actual marches they organized locally and around the country. This year it’s the League because of its landmark anniversary. EDSF is recognizing the accomplishments not only of this remarkable organization but of the conservation movement it helped to spark across the United States.”

Save the Redwoods League will host a special “Redwoods Canopy Speaker Tent,” which will feature special contributions from the California Academy of Science, March for Science, SF Sustainable Fashion Week and Bioneers. Key presentations — including the unveiling of the League’s State of Redwoods Conservation Report, which will address the need to protect, restore and connect people to the forest, along with the League’s vision for how to accomplish this — will come from Sam Hodder, president and CEO Save the Redwoods League, and Dr. Jonathan Foley, executive director of California Academy of Science.

“Throughout 2018 we are inviting the public to ‘Stand for the Redwoods, Stand for The Future,’” explained Jennifer Benito-Kowalski, chief communications officer of Save the Redwoods League. “The redwood forests of California have been here for millions of years. They are not only awe-inspiring wonders of nature, but they are also a powerful force in the fight against climate change. It is the job of all of us working together to ensure that these natural treasures not only survive but thrive for future generations.”

Foley and a distinguished team from the Academy will present two topics, one titled “The War on Science & How We Fight Back,” and “Science & Sustainability – Citizen Science,” which details the major commitment the Academy has made to the worldwide Citizen Science movement (https://www.calacademy.org/citizen-science). Bioneers (www.bioneers.org), an organization that produces a major international sustainability conference every fall in San Rafael, CA, will tackle “Protecting Sacred Lands from Mining and Development” in the wake of the Standing Rock controversy and its implications for similar intrusions of other native lands.

“This year’s festival focuses on activating the public to energetically pursue effective green solutions and integrate these sustainable practices into everyday life,” said EDSF co-director Douglas Kolberg.  “Our goal is to empower the people of the Bay Area and beyond to individually and collectively address the local and planetary environmental challenges we face.”

The Festival again features main stage musical performances from local artists, various informative and interactive learning activities, such as organic cooking demos, the Green Kids Zone & Eco-Carnival, the Artist Grove, artisans and crafts, social justice non-profit organizations and other special features to be announced closer to the event.  For further information about EDSF, Save the Redwoods League or any of the festival’s partners or activities, go to www.earthdaystreetfest.org, or EDSF’s Facebook page: Earth Day San Francisco.

About Save the Redwoods League
Save the Redwoods League, one of the nation’s oldest conservation organizations, is celebrating 100 years of protecting and restoring redwood forests, connecting generations of visitors with the beauty and serenity of the redwood forest. Its 19,000 supporters have enabled the League to protect more than 200,000 acres of irreplaceable forest and help create 66 redwood parks and reserves. For more information, visit SaveTheRedwoods.org.

Save the Redwoods League

Save the Redwoods League

Since 1918, Save the Redwoods League has worked to protect and restore redwood forests and connect people to their peace and beauty. We have pioneered innovative, science-based forest-restoration work, educated thousands of schoolchildren about the uniqueness and resilience of these wild marvels of nature, improved access to parkland, and helped create parks and reserves that have touched the lives of millions of people from around the world.

More from Save the Redwoods League