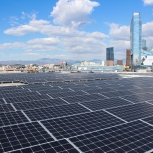 The Los Angeles Convention Center (LACC), managed by AEG Facilities, recently unveiled its 2.21 megawatt solar array on April 4, during a press conference with Mayor Eric Garcetti. Located on the roof of South Hall, the solar addition brings the convention center’s total solar to 2.58 megawatts, making it the largest solar array on a municipally owned convention center in the United States and propelling the City of Los Angeles to No. 1 for the most installed solar power of any U.S. city.

“We’re proud to lead American cities in the movement to meet the goals of the Paris Climate Agreement,” said Mayor Eric Garcetti. “Every investment we make in solar is an investment in the health and well-being of Angelenos today and for years to come.”

The new array is projected to generate 3.4 million kilowatt hours per year which equates to 17 percent of the LACC’s annual energy usage (equal to enough electricity to power 565 homes in Los Angeles) and will reduce the LACC’s carbon footprint by 2,554 metric tons per year (equal to removing 2,794,396 pounds of coal from being burned and/or planting 66,192 trees).

“I am proud to celebrate the completion of the Convention Center’s solar project,” said Jon Vein, Chair of the City of Los Angeles Department of Convention and Tourism Development Commission. “This project has set a precedent for other facilities to follow and is key to keeping Los Angeles the number one solar city in America.”

About the Los Angeles Convention Center

The Los Angeles Convention Center (LACC) is renowned internationally as a prime site for conventions, trade shows, and exhibitions. Owned by the City of Los Angeles and professionally managed by AEG Facilities, the LACC attracts over 2.5 million visitors annually.  The facility is an integral economic component to the Southern California area, generating economic benefits through attendee direct and indirect spending and sustaining over 12,500 local jobs. The LACC also remains an enduring symbol of environmental sustainability and social responsibility, and is proud to be a LEED® Gold certified facility; the venue was recertified on the Gold level in 2015 making the LACC the first convention center of its size in the U.S. to receive LEED® EB:O+M Gold recertification. For more information, please visit lacclink.com.