Walmart, Feeding America and Nextdoor are working to inspire discussions on hunger 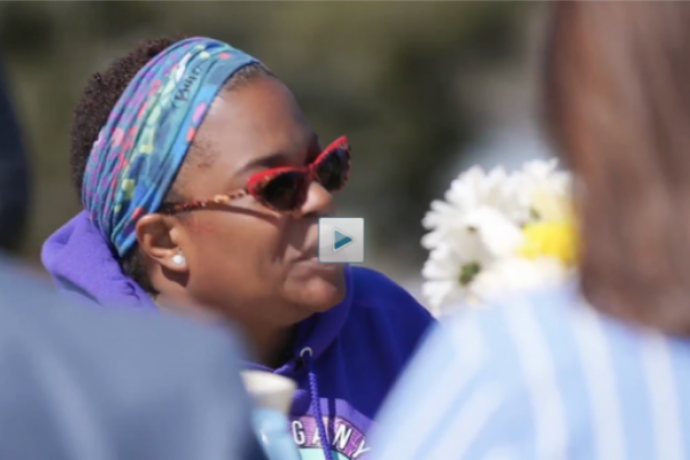 Walmart kicked off its fifth annual nationwide “Fight Hunger. Spark Change.” campaign today online and in stores by asking its 150 million weekly shoppers to raise the bar to support the Feeding America network of 200 local food banks and the one in eight people who battle hunger in America at some point during the year.

Walmart and Feeding America are doubling their meal goal to 200 million meals, increasing supplier participation to 14, and introducing the Walmart Credit Card as a new way for customers to get involved in the campaign. In another first, Walmart is uniting with social networking site, Nextdoor, to bring community leaders and neighbors together around a donated communal table to discuss the local impact of hunger in select cities.

“In communities big and small across the country, there are families struggling with hunger,” said Kathleen McLaughlin, president of the Walmart Foundation and chief sustainability officer for Walmart. “By working together during this campaign with our suppliers, customers and friends at Feeding America, we can help secure 200 million meals that will help those who need it most.”

The ‘’Fight Hunger. Spark Change.’’ campaign launches at a critical time. One in eight Americans (41 million), including one in six children (nearly 13 million), struggle with hunger at some point during the year, according to the USDA. Hunger also affects certain populations more profoundly including children, seniors, and Latino communities, where one in four children are in food insecure households.

Walmart will start the campaign with a $1.5 million donation and aims to donate a total of $3 million to Feeding America based on the public’s social media engagement in the “Fight Hunger. Spark Change.” campaign.

Beginning today through April 30, Walmart is offering four easy ways that customers can get involved and fight hunger online, in-store and through social sharing to help secure meals for local food banks. Visit Walmart.com/fighthunger for further details. Here are the ways customers can participate in the fight against hunger.

“Hunger impacts every single county in the United States. Every day, the Feeding America network of 200 member food banks are on the ground helping children and families who need it most, but we know that we can’t end hunger alone. Feeding America is grateful to Walmart for its long-standing commitment to fighting hunger in communities across the country.  Through the ‘Fight Hunger. Spark Change.’ campaign, Walmart has created an opportunity for suppliers and customers to join the fight to end hunger. We hope everyone is inspired to take action and support their neighbors in need,” said Matt Knott, President of Feeding America.

During this year’s campaign, Walmart and Feeding America are collaborating with Nextdoor, a private social media network active in 170,000 neighborhoods nationwide. Nextdoor is inviting community leaders, city officials, local chefs, the local food bank, journalists and area neighbors to come together around handcrafted tables made by Neighbor’s Table, which will remain as a gift in the community from Neighbor’s Table, to discuss how to best combat hunger locally. Following the community gatherings, members of each community are invited to learn more about ways they can take action to help their local food bank and will be encouraged to meet and connect.

To download and use in its entirety with permission: A short film by Walmart and Nextdoor of the first event in Charlotte, North Carolina: https://walmartfilms.wistia.com/medias/2immiw8b7s?media_finished

To embed the short film: https://youtu.be/TRCoNMywKS0

“It’s a tremendous honor to partner with local food banks and community leaders across the country to support those facing hunger in our neighborhoods,” said Nextdoor Co-founder and CEO Nirav Tolia. “Walmart continues to step up to take action against hunger and help local Feeding America food banks, and this undertaking aligns perfectly with our commitment to help neighbors come together to build stronger communities in America. The food crisis that is impacting millions of Americans every day is a huge challenge, but neighbors coming together in local communities can make a true difference."

As the nation’s largest grocer, Walmart is in a unique leadership position to positively impact the issue of hunger in the United States. In October 2014, Walmart announced a commitment to create a more sustainable food system, with a focus on improving the affordability of food by lowering the “true cost” of food for both customers and the environment, increasing access to food, making healthier eating easier, and improving the safety and transparency of the food chain. This commitment includes a goal of providing 4 billion meals to those struggling with hunger in the U.S. by 2020.

To learn more about the campaign and to track donations, visit www.walmart.com/fighthunger.

About Walmart
Walmart Inc. (NYSE: WMT) helps people around the world save money and live better - anytime and anywhere - in retail stores, online, and through their mobile devices. Each week, nearly 270 million customers and members visit our more than 11,700 stores under 59 banners in 28 countries and eCommerce websites. With fiscal year 2018 revenue of $500.3 billion, Walmart employs approximately 2.3 million associates worldwide. Walmart continues to be a leader in sustainability, corporate philanthropy and employment opportunity. Additional information about Walmart can be found by visiting http://corporate.walmart.com, on Facebook at http://facebook.com/walmart and on Twitter at http://twitter.com/walmart.